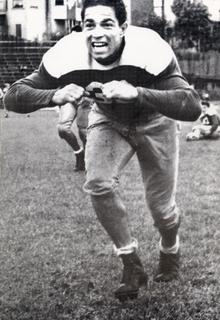 Back to the early years ...

Though Mel and I met in early adolescence, our paths didn't lead to a relationship until we neared young young adulthood (19 and 23). As an extremely handsome all-star quarterback -- in college on an athletic scholarship -- he had been engaged to the lovely daughter of a local dentist (pretty impressive stuff in our group). I'd had a succession of young boyfriends (one that was serious and that I was later to regret having abandoned). My parents adored Mel who showed all signs of being dependable and good husband material, and besides, he was handsome and fair-skinned (top assets among Creole parents). At a time when leaving home was solely dependent upon finding a husband, this was total fulfillment for my parents. There was no thought of education beyond highschool. It would be unfair to say that I was resentful, it was simply the way it was. Success for a girl was a proper marriage. Choice was an unheard of concept. 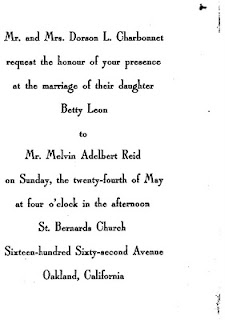 At a formal ceremony at St. Bernard's Catholic church on May 24, 1942, we were married by Father Kelly (the second Father Kelly to figure in my life), and started life in Berkeley in a duplex that Mel had managed to save for while attending college (down payment of $750, as I recall). I understood that his former fiance's parents found him inadequate since their wish was that he become a physician (far beyond his capacities) while his ambition was to be a truck driver for Wonder Bread Bakeries (later Continental) where his father had spent his entire working life. Only problem was that -- he was unable to do so because the Teamsters would not accept a non-white in membership.

Which brings me to one of the ironies that later helped to shape my politics:

Thomas Reid, Jr. -- Mel's father -- was employed by Wonder Bread Bakery at the age of 14. He'd left school at that time. He was a shy and kindly hardworking brown-skinned man whom I barely knew. For all of the years -- from that age until he retired at sixty -- he'd worked nights and slept days. And, for all of those years he'd lifted 100 lb. sacks of flour from railroad cars to the dock without ever rising above that duty. I remember my silent fury the evening that we attended his retirement dinner at the huge wholesale bakery and a succession of white men extolled "Tommy" and spoke about how helpful he'd been over all of those years, how "faithful" he'd been, and how grateful they were to him for "helping to orient me to my duties when I entered the firm totally inexperienced -- green...". After all those years, he'd not risen to the status of having a last name. His son (and my young husband) could not become a bread delivery truck driver though everyone had known him from childhood -- attending the annual Christmas parties with his Dad -- and being awed and inspired by the world of the Plant. How sad! 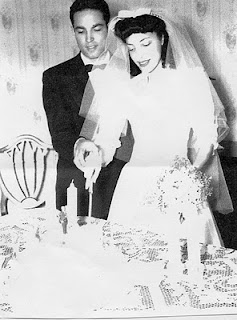 That evening when they handed aging "Tommy" his gold watch, I felt the breath catch in my throat, though to have spoken out would have been unthinkable. I hated those men (and they were all men), with a passion, and added the experience to the many racist incidents that were coming in ugly waves into my life. This coincided with the events of the new "Colored" context that had arrived with the war effort, and with feeling set apart from the world I'd grown up in -- in the relatively racism-free Bay Area.

It was in this climate that Mel and I married and moved into our Berkeley duplex that was situated on a street where the Santa Fe railroad ran right in front of our doorway. We watched untold thousands of warworkers arrive throughout the day and night, hanging out of train windows for their first signs of the "Golden Streets of California." We lived no more than 15 minutes away from their point of arrival. It was as though the ground was visibly shifting beneath our feet with each thundering trainload.

"The South" was arriving under our noses, with white and black folks who -- at that point -- had never shared restrooms or drinking water fountains, or been buried in the same cemetaries, and were now bringing Jim Crow right into our living rooms, but all of that had been pushed to the background by the demands of the war effort. Few noticed that the Klan was burning crosses in the nearby hills, or that "separate but equal" facilities were cropping up in order to accommodate the biases of these white southerners from Louisiana, Oklahoma, Arkansas, and Texas. Home would never be the same.

Though Unitarian Minister Thomas Starr King, and some parts of the California State Militia (and some of our ancestors) had succeeded in keeping California out of the Civil War on the side of the South, it was unclear whether or not this 20th century "invasion" would hold the line. In much of the state -- even now -- I'm not at all sure that we did. It was in those years of my youth that it was not possible for Negroes and Whites to marry (or even those who appeared to be-- as was the case with a blond and blue-eyed cousin who had to leave the state for Nevada), or to teach in the schools, or to move up from loading 100 lb. sacks of flour from the dock ..., or to work in any job other than those in the service sector. This was new for our fast-disappearing "new immigrant" early colored settlers in the west. Our world was being buried under by change we were ill-prepared for.

Mel's heart-breaking experience in his brief encounter with the Navy and mine with the Air Force (then in the Jim Crow Auxiliary union), added up to our determination to never again work for anyone. In June of 1945 we tore out a wall in the street front garage of our little duplex, took out commercials on a local radio station, and went into business for ourselves. Reid's Records and the adoption of our first child happened within 3 months (Rick was born in March of 1945). We were instantly successful -- with a new attitude about our racial heritage -- no more ambiguity about what being "colored" meant, and the will to move with the culture, we became the headquarters for what was then known as "race" music (blues, black gospel, and jazz).

While Mel continued to work on the late shift at the Richmond shipyards and spend his days as playground director at San Pablo Park not too far from our Berkeley home, I spent my time playing merchant with the record stock piled in neatly-arranged orange crates, a cigar box for the money, Rick in a playpen on the concrete floor, and about as much knowledge of what it meant to be a retailer as my baby might have! But in a fast-changing world, it mattered not. Keeping up with the demand was enough to occupy my brain, motherhood was something I loved, and the novelty of the breath-taking social change were enough to keep me from losing my mind. I was far more curious and engaged than fearful, so survived. In time, my marriage did not. But that's for much later.

...and now it's time to take a deep breath and let it all go ... the tension of remembering.

Photo: Melvin Adelbert Reid, quarterback for the University of San Francisco Dons the year he was named All-State. He later joined the Oakland Giants, the professional team that preceded the establishment of the NFL.
Posted by Betty Reid Soskin at 10:46 AM