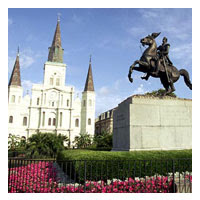 In midweek I'm jetting off to New Orleans in another grand adventure ...

... it has been many years since I've visited my ancestral home.  I believe it was in the mid-Eighties when Bill and I -- on impulse -- hopped on United to spend part of the Mardi Gras season.  This would be his introduction to the Creole world of my childhood and my family's pride.

It was a strange time that started off with our landing with summer clothes in February (brrrrr!) thinking the weather would be tropical.  My last visit had been many decades earlier -- in adolescence -- when I was allowed to travel South to represent the Northern California clan at Mammá's birthday celebration.  I remembered it as steamy and overgrown with empty lots looking like mini-jungles -- with board sidewalks on unpaved streets in the parts of the city where some of my relatives lived.  I remembered short downpours almost daily during that summer.  But this was something quite different.  The steaminess was replaced by a moist chill that penetrated to the bone.  And we were like the tourists seen shivering along the Embarcadero in tee-shirts and sandals in a wintry Bay Area July.  We were completely unprepared, climate-wise.

This time I will be arriving in town as a guest presenter for the International Convention of the WWII Museum, and, as representing the National Park Service.  The conference site is the Astor Crowne Plaza Hotel, a place where my grandparents and parents would visit only when delivering goods or services, and through the servant's entrance at that.  My memories go back to a segregated city fully committed to southern tradition.

Over the past weeks I've been silently re-living that southern tradition as I recall a trip to Washington, D.C., with Bill when he was scheduled for a visit to N.I.D.A. in relation to his continuation grant, I believe, and would be my first trip to the Capitol. While there I was anxious to see the historic places which meant renting a car to drive to Mt. Vernon and Monticello -- then to Williamsburg, Virginia.  At Mt. Vernon and Monticello, I was simply an American exploring my country's historic sites, and nothing more.  However, by the time we reached the exclusive hotel in Williamsburg, I'd experienced enough southern history to have been transformed into Betty with her white husband (I'd forgotten about that), and guilty of something that my growing up in the liberal Northern California community had not prepared me for.  In the world of the University, we were simply seen as having reached a level of sophistication that made racial and cultural inter-marriage somewhere beyond the norm.  We were "international."

I remember (shamefully) that -- as we drove into the carriage entrance to this exclusive hotel -- I was so overtaken by fear (remember, we'd been visiting slave quarters only hours before), that I was (head down and eyes averted) carrying luggage and walking a few paces behind Bill -- trying as hard as I could to escape notice.  I hovered behind a potted plant as he checked our reserverations at the desk.  I was miserable!

That night we made our entrance dressed in evening clothes for a fancy supper in the ornate banquet room. It was obvious that I was the only person of color -- other than the waiters -- in that elegant space.  I'd not been sharing my discomfort with Bill, so he was unaware of my misery.  As the neatly-uniformed all-Black dining-room staff began to peek out of the circular window of the door from the food preparation area, I was absolutely vibrating with mixed feelings.  I could imagine conversations in the kitchen about this mixed couple.  Could they be imagining that I was "passing" or at least trying to?  Or far worse, were they imagining that I was someone "of color" picked up for an evening's  entertainment?  I was surely pretty enough for tongues to wag.  A mere sexual liaison?  My imagination painted a horrifying picture, and for reasons that are unclear to this day, I felt guilty and guilty of what, I had no clue.  Makes one wonder at the potency of racism that appears to have the power to inflict its pain over generations.  Whose guilt could I be channeling, and why? 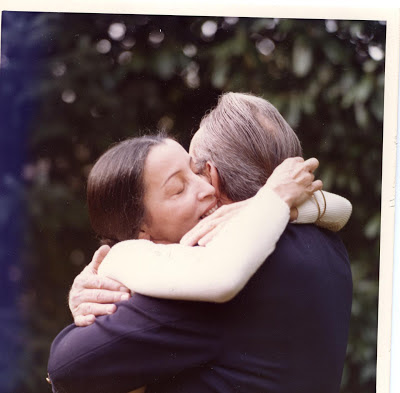 There was a live orchestra that was making dedications occasionally from the bandstand.   I was puzzled as I watched Bill whisper to the bandleader at one point, and surprised to hear the next dedication -- a waltz -- "to Dr. and Mrs. William Soskin of California on their 35th wedding anniversary!"  Of course we had only been married for a few years at that point and this date held neither of my anniversaries, but if you counted my earlier marriage to Mel, at least I'd been married for that long, just not to him. Giggles took over and fear was replaced by sheer joy!  Everyone applauded, and we danced on the graves of all the southern traditionalists in Virginia -- and, almost everyone in the room rose and were dancing with us before the song ended. This was a far different world than the one in which I'd been trapped for all those lonely hours in a luxurious hotel suite so far from home and the world of freedom that I'd so taken for granted 'til now. 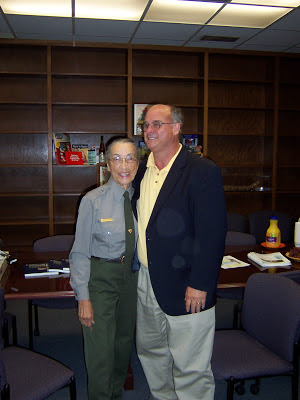 Bill (the psychologist) had noticed.  He had found a way to help me to confront my fears in a most beautiful way.

The waiter smiled knowlingly as he served our after dinner aperitif but his insinuating grin no longer threatened my sense of self.  I quietly wept my relief into a beautiful brandy snifter and filed the memory away until now.  Strange how time and memory work together so that all of the affect of that moment has been refreshed into my fingertips as I write this -- and tears are brimming ... .

Maybe I'm the Avatar who was meant to bridge this gigantic chasm of a racial barrier for the entire Charbonnet/Breaux/Morales/Allen ancestral Grand Opera!  We are America, are we not?  We've lived the great American narrative, and it is colorful and epic.

If you hear a great hullabaloo over the next several days, it may be the white and brown ancestors either doing a stately celebratory 18th century quadrille; prancing a sprightly Mardi Gras "second line" between the graves, or, furiously hurling fragments of headstones at one another in one horrendous fit of total outrage!  Either way, cousin Paul Charbonnet and I will know that our coming together over the past years was/is a milestone in the lives of one of the great pioneer American families of Old New Orleans.


Posted by Betty Reid Soskin at 3:21 PM No comments: