This NatureBridge annual fundraiser brought us together ... . 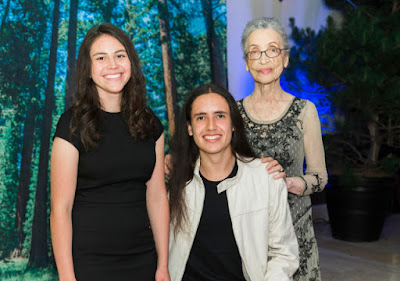 These two young people are this  year's honorees at this  year's Gala in San Francisco.  They are 16 year-old Marisa, and an amazing 17 year-old Aztec/American activist, Xiuhtezcatl.  These two helped to inspire the raising of $600,000 for the NatureBridge scholarship fund for this year.

The opportunity to interact with such young people, and to (perhaps) influence their activism forward is something I've come to value as a privilege beyond all expectations in these final years.

The close relationship between the National Park Service and this extraordinary service organization has added to the growing diversity present in my work and life that now extends far beyond the borders of the NPS, and into a far greater depth of involvement in those Movements that may yet save us all.

Saving Planet Earth is basic to all else.
Posted by Betty Reid Soskin at 10:08 AM No comments: Links to this post

Since September of 2003, there has never been such a long time between blog posts ...

but neither has there been a more event-filled period in my long life -- or a time when so much was happening that defied description ... .

Since I last posted, my book, Sign my name to freedom, was launched (February 6th) and the "phantasmagorical" began to happen!

Why on earth would anyone believe that -- since then, I've done many book signings (Pegasus, East Bay Book Festival, the Commonwealth Club in SF; Pixar (or have I told you about that one?), a trip to do the World Muse conference in Bend, Oregon, plus a return trip for a book signing);  a trip to Washington to receive the Robin Weeks Award from the National Parks Conservation Association; plus a side trip to NY to appear on The Moth (NPR) at the prestigious Lincoln Center as a storyteller; another to present before the Women of Nike in Portland; and this week's flight to appear as a cast member of 5 story tellers for The Moth in Seattle.  Add to that a book signing for the Berkeley Historical Society followed by another for the Martinez Historical Society next Sunday.

This is only a sampling of what life has been like over past weeks, only hitting the highlights, but it should give you an idea of the pace at which I'm now living.

I will try to look back over time and post photos, but I've simply lost track of most so will need to do some research before doing that.

One of the most exciting events is something that I've not mentioned before but that stands out as one of the most satisfying experiences the days have offered:

I've spent the past 3 weeks attending the practice sessions of a children's jazz band at the Community Music Center in San Francisco where Marcus Shelby, noted composer/arranger/conductor teaches.  Their ages are from 7 to about 16, the 7 year-old being a sweetest little violinist you'll ever meet!

There was an early evening concert ending their school year held last Tuesday -- hours before my flight to Seattle.  The audience was made up of parents and interested others, plus an augmented film crew to cover this segment for the movie.

I'd so looked forward to this particular event since it allowed me to introduce a new generation to old issues, the generation in which those illusive answers might well be found.  That my music should be introduced in this way seemed fitting and right.  It is these children who may guide us forward into a more compassionate future.  If those kids in Parkland, Florida, are any indication, our democracy may finally be ready to face up to its potential as a world leader toward those long deferred promises.

They were being filmed as a part of the documentary now in production by filmmaker Bryan Gibel.  You cannot imagine how amazing it is to have those children playing 3 of my original songs from forty years ago.  They've been arranged by Shelby who has given them new life in an age where the issues they raise remain unresolved.  Jamie Zimmerman, 19 year-old jazz vocalist, breathed new life into the lyrics, and I was able to hear them differently, and -- because of the passage of time -- in the third
person without judging.  Those songs are brilliant!  It was as if I'm hearing them for the very first time.  It's the first time I've heard my music interpreted by other voices (the first was by Judi Jaeger, my Bob's partner, at the first book signing), and find myself wondering why I'd allowed them to become lost?

The songs will provide the sound track for Bryan's documentary, and will be released in album form when the film is released.

How much life can be crowded into this final decade?


Posted by Betty Reid Soskin at 3:43 PM No comments: Links to this post