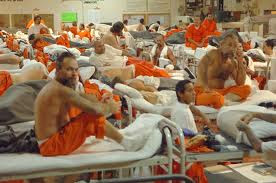 The unresolved issues about the rights of undocumented immigrants just beginning to take shape in the White House and the Congress ... .

... are causing some sleeplessness these winter nights, and as is so often true, are becoming interwoven with another stubborn issue -- our disturbing numbers of American citizens of color living lives of desperation within the walls of our prisons.  (Read "The New Jim Crow" by Prof. Michelle Alexander for a more complete picture.)

I've now been blogging for so many years that there's a personal record of my having anguished through these issues before, and repeatedly.  No need to repeat that diatribe here.

I just took myself back a few years (by entering a few key words in that little white search bar on the left side of the screen just above the banner) where I was able to read back over earlier writings on these troubling subjects.

What makes today's news that the Post Office is threatened with further closures -- and that 1 in 5 postal workers has been African Americans since the 1880s -- means that literally thousands of unemployed people of color are soon to be added to the ranks of the unemployed in a national economy too weak to sustain them and their families.

I believe I've found them -- those displaced African American service workers.  They have been moved from the projects and welfare lines into our prison system where they are facing either life sentences, or, are faced with disenfranchisement upon release and re-entry without rehabilitation of any kind; stripped of the right to vote (in many states); having to register on job applications as having a criminal record, and with little hope for a future of any kind except the return to the prison as a means of survival.


Note: The passage of time and our failure to solve some basic issues as a nation, means that little has changed, except that I've grown older without finding comfort around these questions.  If you'll enter the words displaced service workers and/or Immigrant Rights into the search bar you'll bring up those discussions -- me with myself  -- on these subjects.

Posted by Betty Reid Soskin at 2:07 PM No comments: 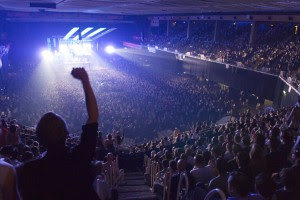 Lately I've been thinking about the dangers of absolutism and its expression thereof ... .

There's been a shift in the way I interpret philosophical issues these days ... a kind of re-thinking of long-held views.  I'm clinging less to my own analyses and finding fragments of opposing views creeping in --even when hopelessly contrary to my own strong beliefs.  Another developmental stage in the aging process?  It's likely.  I'm less subject to suffering fools of late, but more trusting of others to find their way without benefit of advice from me.  Finding more universality in myself and of the other's ability to figure it out without my interference; even my children and grandchildren.

Sitting in the audience of a gospel concert surrounded by "believers" might have shaken my agnosticism at some earlier time;, but at my age it's easy to not be intimidated, or, to feel envious of the fervent believing of others -- but I'm perfectly comfortable to sit as an outside observer to what I now see as the difference between faith and fact; to draw what I need from the experience (the magic of this amazing and soul-stirring roots music) and to leave what I cannot use behind.

That one believes something to be true does not make it so; not for oneself nor for others.  But when sitting among many who share beliefs-in-common, the seduction is palpable!  Small wonder that faith healers and shamans can perform their miracles.  There is an almost visible magnetism present, and the wanting to be healed is powerful enough to meet the healer half way.   Would that we could bend this power to our will in other areas of life.  For instance maybe gun conttol would not seem so unachievable.

Puts me in mind of the time that I was alone on the streets of Boston; a city I'd never before visited.  My destination lay several blocks away.  I'd been told that it was an easy walk from my hotel.  Except that it was five o'clock, and I was walking against a mass of people rushing past on the sidewalk -- with some even slipping off into the gutters in their haste.  It was all I could do to not turn around and fold into this stream of humanity.  Was there some incident up ahead -- out of sight -- some unforeseen danger that they were running from? Were they fleeing in fear from some unseen evil?  It took every ounce of human strength I could muster to not turn around and join the crowd rushing past!  I stopped for a minute -- leaned against a newsstand for support  to take another look at my hastily-written directions for reassurance.  At that moment I caught sight of a sign on a nearby lightpost that explained my dilemma.  That great moving mass of humanity was just getting off work at the end of the day and heading for the Metro.

The mind is quixotic:  The image that rose to mind a moment ago was -- that long ago during a menopausal hot flash I couldn't imagine that anyone in the room couldn't see the steam spewing from my ears!  Surely it was clearly visible.  Why did they not see?  If you could see my grin right now you'd know that the next thought was that -- if men experienced hot flashes -- a verse would have appeared somewhere in the bible that this was undeniable proof of the existence of the Soul.  And -- that for most of my life I just may have been moving on a path filled with people rushing swiftly for the Metro of life, and, that just might be okay -- if I just take the time to reassure myself every now and then.