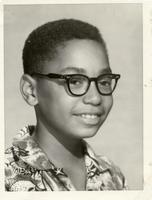 One of those early parental miscalculations ...

that will always haunt me was a decision I made during the construction of our home. The building period spanned from early spring to around November of that year. Rick was in third grade in a Berkeley elementary school where he was doing so well that there were suggestions from his teacher that we begin to think of having him skip the next grade and enter fourth grade on probation in the fall. I knew that we would be moving to the Walnut Creek school system in late fall so that had to be a consideration in just how the transition would be managed. In the new school he proved to be working at grade level. The differences in educational levels between the innercity and suburban schools surfaced immediately.

Mel and I (I, actually) decided that the least disruptive way to deal with the problem would be to register him at Parkmead Elementary in Walnut Creek for the fall semester and have him ride out each morning with his Dad while the house was being completed. Sensible solution, right? No. Disastrous as it turned out.

This 8 year-old was being dropped off each day into a hostile world of children who were expressing all of the venomous racism that was being freely expressed around their dinner tables each night -- ugliness that the adults in their lives were not honest enough to show publicly to Rick's parents. It must have been horrendous. Poor little guy never mentioned it, and I was too pregnant and pre-occupied with toddler Bobby and the house-building to even be aware of his pain. It had all seemed so logical, sans the race element. After all, the kids on our block had overcome their feelings of discomfort with us long before their parents had.

Sometime in the late fall I attended a parents night at school and was asked by the principal just why I'd enrolled my child in his school when I didn't live in the district? We'd moved into the new home that October, so the question held no relevance, but the principal's inability to meet my gaze suggested that his question was being asked due to pressure from other parents. Rick was the only black child in the school. We were only the second black family in the entire valley at that time. We were breaking new ground, reluctantly, but with a growing defiance and a feeling of entitlement -- but those strong feeling were not yet fully matured. There were still times when I wasn't all that sure that we were right ... . 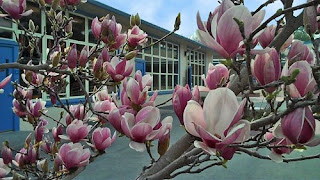 Parkmead figured powerfully some time later when Marian Powelson, a sympathetic neighbor, mentioned that she'd picked up a flyer advertising a minstrel show fundraiser being staged at the school.  We were both horrified at the thought, but didn't have a clue about how to deal with it. The image of white people in black-face, kinky wigs, with huge white painted lips was just too impossible to imagine. This could only happen in an all-white suburban community. This was a total anomaly in present day America. But I had children in that school (by this time I believe Bobby had entered kindergarten, but I'm not sure of the timing).

Just one day before the big show I drove to the school with no idea of what to do, except that I had to act. I walked into the principal's office and sat down to wait. He was off somewhere, but his costume was hanging over the doorway. He was in the show, as were all members of the faculty. The costume was black and white and bright red polks dots with baggy pants. I could feel my chest tighten ... This was terribly terribly wrong, but I still didn't know why I was so offended.

He walked in -- almost whipped around on his heels at the sight of me -- but turned back and continued into the room. "This is wrong," I said quietly. To his credit, he answered, "I guess you're right, but I didn't know that until I saw you there." "Our faculty loves colored people, and we're only depicting them as the happy people that they are -- with their songs and jokes -- and stuff ...". My answer, "...do I look happy?" "No," says he. "Let's think this out together," says I. "Minstrel shows were originally conceived as ridicule of Negroes, and were never a black thing. They are still that. We can't afford this kind of tradition to follow us through history to continue to heap insult and degradation upon a people, least of all at the hands of educators who, above all of others, should know better." "What would you have me do," asks this man who by now was flush-faced and miserable. I felt sorry for him in that moment. It was clear that he was in a learning place, and that it hurt. He was horribly embarrassed.

I told him that -- with tonight's dress rehearsal at hand and the show only 24 hours away -- I would not ask that they cancel. I did insist, however, that a portion of tonight's rehearsal time be devoted to sharing my concerns. Also served warning that -- tomorrow evening I would be sitting front and center (with the Bessie Gilbert) to see their show. And we did just that.

It was a dreadful evening. Little was gained, I think. The experience was miserable for me. There was as much anger and resentment stirred by my act as enlightenment. I'm certain of that. It did little for my own kids since I found it impossible to talk about most of these things -- never sure that by doing so I wouldn't simply further alienate them from others... .

Only a few weeks later, there was an Aunt Jemima Pancake Feed held by the local Chamber of Commerce at a downtown park.

And ... new friend and neighbor, (very blonde and deeply-tanned) Pat Ringwood, stopped by with the gift of a few cuttings from her garden -- to show me that her tan was now darker than mine!

We were getting there, slowly ;-)