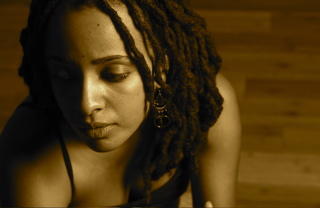 New connections ... newly discovered writers, poets, singers, and activists among those who will follow ...

Young Zena and Yaminah have recently entered from stage left to take their places on that continuum of Reid, Allen, Charbonnet, Parker, Galt, and Moody, "woman lives". The succession goes on as the matriarchs yield the life force to a new generation. Find myself wondering if Mammá or great aunt Alice or great great grandmother Celestine thought about such things in their final years? Did their Catholicism continue to answer all of their questions or were they, too, left with "dead is dead" as it has been for both writer Joan Didion ... and for me? Is this, then, the kind of awareness that develops as time begins to wind down? Am I alone in this?

Maybe Zena Allen's singing and composing ability and Yaminah's budding political activism feel just a bit like extensions of my own life -- and therefore provide a sense of ... what? I knew neither of them until the past few weeks -- so there surely could not have been any influences imposed on their social development -- at least not from me. But I will try harder now to find old tapes of my songs and will offer them to Zena to add to her repertoire. Perhaps that is the "why" of my music, after all. The songs were written for some purpose, though that seemed only serendipitous until now.

We met at her grandmother, Maybelle's, memorial service. She grew up on the east coast, the daughter of Prof. Ernest Allen of Amherst and a mother whom I've never met. Another of the Allen-Reid connections of which there were four such for these large families. Wonder how these bloodlines will play out over the next generations?


Last night brought a phone call from UU minister, Paul Sawyer, who has returned from his meetings at Cambridge -- that jarred me out of the lethargy of holidays and back into the awareness of the pending execution of the oldest prisoner on death row. It's scheduled to take place very soon now. The clock is moving steadily toward another confrontation with the governor's office with another deathwatch to live through. Maybe clemency will be granted this time, and maybe the re-examination of the efficacy of the death penalty as a prelude to the hearing of Assemblymember Mark Leno's bill will gain support. This man's age, poor physical condition, blindness, and the fact that he will be brought to the death chamber in his wheelchair should make a statement about the ritual of death that we'll again have to live through. There could hardly be a more bizarre case upon which to hang this awesome penalty.

This man has become a published poet while serving time. Some of his work will be on hand to be read by those of us who will gather for this new vigil. I'll meet Paul and Country Joe MacDonald and others at the prison gates on Tuesday at noon where there will be yet another press conference and the beginning of a new action in the hope of stopping state executions until we've had a hearing on the Leno bill in the new legislative session sometime in January.

Last Friday, December 29th, would have been the 52nd birthday of Stanley Tookie Williams, had he lived. Barbara Becnel and those who continue to work to clear his name met that day on the steps of the capitol in Sacramento to declare this date evermore as "Redemption Day" and have vowed to meet to memorialize his life annually as they work to bring an end to capital punishment to this state and, hopefully, to the nation. This, done in Stan's name, will have given meaning to his troubled life and senseless death.

It has been a troubling year in many ways, has it not?