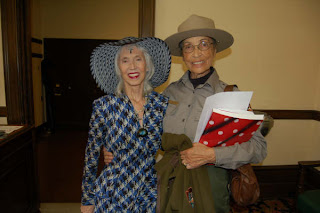 It only took a moment ... and then decades of misguided impressions dropped away... .

Standing as tall as I could stretch my five-foot-three-inch frame, gave me just about enough heft to get myself through the lobby and into the elevator of the War Memorial. I'd removed my fedora just as I entered -- but once in the elevator -- placed it back on my head for just a bit of extra courage. It worked.

Once on the second floor I walked the long hallway to another that led to a door standing ajar and the sound of genteel voices that grew louder as I approached. Their meeting was in progress and I slid as quietly as I could into a seat just inside the door to await my time at the lectern.

It was soon evident that there was little to fear in this room. Whatever was to come could be handled. These were clearly lovely mostly Southern(?) ladies tending to business. And the business was reverence for God, country, and home -- in that order. Despite the initial feeling of being a jarring element in this orderly setting, I found myself relaxing into the mood of the room.

When a flyer was passed around advertising the upcoming Kentucky Social which promised mint juleps and Derby Pie I felt the last of the up-tightness melt away and in its place came a silent giggle of curiosity and warmth for this sisterhood that seemed both at home and absolutely alien in San Francisco. Funny. It was only "alien" in my everyday world; surely not here in this most cosmopolitan of world cities with something for everybody. Surely this Southern -- all White -- sisterhood was just another collective under the diversity tent. Just a few blocks over in the Fillmore there might well be an all-Japanese tea ceremony going on; and a few blocks beyond that -- an all-Black group preparing for a Gospel Concert over barbecue, mustard greens, and macaroni-and-cheese while planning next year's Juneteenth celebration! It occurred to me that the operative word here should be authenticity; the art of being precisely who you are. This is the common denominator for all such cultural groupings.

I could do this. Martha was quite right. It only took a slight shift in perspective.

When the business of the meeting ended and a touching candle ceremony held -- it was my turn.

Not sure just how I opened my remarks, except to introduce myself, my Great-Grandmother Leontine Breaux Allen, and my mother, with a statement that I'd arrived with much uncertainty about their expectations and just how I might fill them. "Did you understand that I was an African American?" No one ever really answered the question ... but it ceased to matter.

After a brief bio of sorts and some personal history of my WWII past, I looked around and spoke directly; "...you know ... such conversations across these barriers were not possible 20 -- maybe only 10 years ago. We must have them now -- informed by all that has happened in human relations since the Martin Luther King era." It was true. With those simple words I'd placed us all beyond those damning social barriers -- placed us all on the same side -- and it felt right. Could it really be so simple after all?

I spoke for no more then ten minutes and we dissolved into chattering females, "...my what a beautiful hat!", and it was over. The room felt larger and the sounds softer somehow as we sipped tea and grazed the table loaded with homemade cakes and pies.


On the day after I received a lovely note from someone who'd been in the audience. It was enough to bring tears -- it was she who had visited my blog and discovered my references to Marian Anderson. She wrote about the event of long ago at Constitution Hall as her own history -- learned from her grandmothers. Were it not for a feeling that I would be intruding on her privacy I'd post it here, however -- she ended her beautiful note with these words:

“I really, really want a world in which the only time anyone's skin color matters is when they're picking out clothing and deciding what colors look best with it.”

Photo: Ms. Dixie Lee Mahy, Chairperson of the meeting. And, yes, that is a small metal cross in the center of her forehead, a unique expression of her faith. Though I seem to have been the only person to notice. Photo by Kathy Samuels of the DAR.