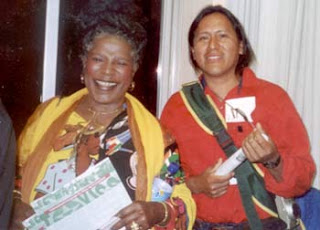 To hell with the vacuuming!

I'm in the midst of a major brainstorm here, and the imagination shall not be denied.

What if it were possible to secure the International hotel by getting the city to purchase it for safekeeping while we wade through these intriguing possibilities? This would allow Ethel's son to inherit the proceeds of the sale (the building surely has little value in today's market) in order to get on with his life. His needs must not get lost in any of this. There may be some way to get the Redevelopment Agency to turn its attention away from that long-neglected part of the community for a while longer ... maybe ... and restrain its tendency to bulldoze the site for the purpose of another scattered site project.

Then, supposing, if that were accomplished through the benevolence of the city -- we would be able to design a program that would bring together (for the purposes of educating the community and its young people to this important history) preservationists, union craftspeople, and the youth of the city to study and restore the building to take its rightful place in the colorful history of the Bay Area? The International Hotel could become the training laboratory for teaching all of the skills needed for careers in historic preservation where youth could be trained in electrical wiring, carpentry, masonry -- all of the skills associated with construction denied their parents and grandparents at the time when those two great union organizers and civil rights leaders made their life-changing contributions. What a way for the labor unions to become accountable for past sins, find atonement, and claim redemption. Alright, that's strong language -- a bit over the top -- but not too far from the reality as lived at that site at that time. The effects of their denial of equal opportunity for members of the black community are surely still visible in this city and others like it across the country.

Not to be discounted is that fact that -- like so many of the make-work projects designed by well-intentioned social agencies and nonprofits for young African Americans -- this work could hold deep meaning to those who participate, adding dignity and self-esteem. A partnership with the Black Studies Department of the community colleges would be an exciting possibility.

There must be grants available -- perhaps from the unions -- that would underwrite such an undertaking. Do you suppose?

Perhaps this building, then, could house Richmond's first version of an African American history museum.

Crazy? Maybe, but I'll bet Ethel Dotson would say a grand "Amen!" to such dreams.

And now I really do need to make that trip to the dumpster and get another load in the washer ... . Such wool-gathering is time-consuming -- but I still have the entire holiday weekend in which to find a better use for time away from my desk. My non-ranger time may be slowly shrinking -- but the complexity of Betty Soskin still demands time and space -- and that's probably as it should be.

Photo: Ethel at a happier time.