Visit to the Museum of American History ... and into my own past ... . 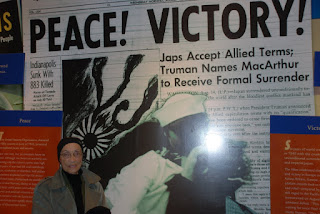 It felt as if I'd stepped into a time warp ... and that young Betty might pop up at any moment. Strange experience. There was that sometimes feeling of standing outside myself looking at my process. Crazy!

I thought of Les Williams and Francis Collier, two young men who would later serve as Tuskegee Airmen,and whom I once dated as a teenager. Thought about my young husband, Mel's, vain attempt at serving his country; finding himself a victim of discrimination in the Navy that would have made him a messman when he'd volunteered to fight! And he'd left his senior year at the University of San Francisco to do so. Thought about his lifelong feelings of disappointment at having failed his country when his young friends had managed to bury their humiliation and give it their best. (These are thumbnails so you may want to click on the picture to read the newspaper headline.) 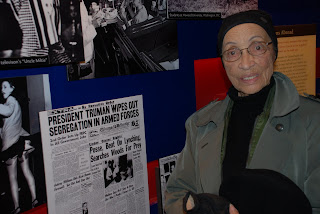 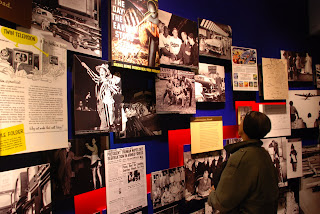 Those feelings in juxtaposition with the historic happenings on the Capitol Mall -- the feeling that -- despite all contrary logic, it has all happened so fast! The illusion that within the past few hours time had collapsed into some alien dimension that sharpened my sense of the pliancy of our Constitution that would have allowed us -- within my lifetime -- to have moved from that awful truth to this new reality. How could this be?
Posted by Betty Reid Soskin at 1:00 PM