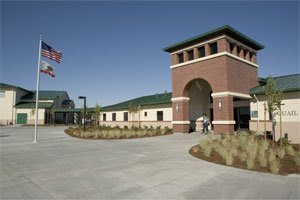 Writing on my journal has moved down on my list of priorities ... and I've missed it (and you) ... .

There have been many demands on my time of late, and I must admit to some creeping fatigue. Am not ordinarily at such a low ebb as I've felt these past several days -- not sure just why that is, but it could be simply the demands of the past two months.

Found myself a couple of weeks ago sitting before an assembly-hall filled with little ones. I was the centerpiece for the Black History Month celebration at the invitation of the African American parents of Quail Run Elementary School in San Ramon, California. There were two assemblies; the first for K-3rd grades and the second 4th & 5th. Beautiful children who filed into the room and seated themselves on the floor in a most orderly fashion.

It was lovely to notice that this collection of bright little faces was quite possibly the earliest evidence I've actually seen to date -- of the non-majority-majority status now enjoyed by this state. I noticed on their website that one-third of the student body is East Indian. The racial groups in the room represented not only East Indian but other Southeast Asians, Native American, African American, European-American, in almost equal numbers. I suspect -- a number of kids were from below our borders in South and Central America and Mexico, though they were not nearly as visible among these children. It was a veritable rainbow of faces -- the world as it is fast-becoming.

Since this is a very new community with the new school isolated on otherwise empty acreage for at least a mile around -- bordered on one side by newly-built homes giving way to a vista of empty fields for as far as the eye could see. It was a safe guess that these were children of Silicon Valley techies and scientists from nearby Mountain View for the most part and pretty much of a relatively privileged class. San Ramon is also the corporate base for Chevron-Texaco worldwide operations.

One of the parent planners who emceed our assembly presented a PowerPoint on a large drop-down screen of black icons (Dr. King, Rosa Parks, Malcolm X, W.E.B. DuBois, etc.,) -- asking the children to identify each and introducing those unknown with brief bios. This was followed by a choi 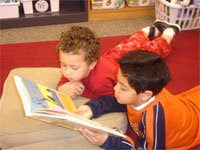 r of little ones singing "Lift Ev'ry Voice and Sing" (the poet James Weldon Johnson's Negro National Anthem) followed by another small group performing "step dancing," an art practiced in historically black colleges throughout the south. They'd been coached lovingly by another of the moms.

I was delightfully surprised at how well-informed these children were with many hands raised excitedly -- great participation! These were far and away the best informed kids I've seen at these grade levels.

It was my turn, finally. So, seated at the edge of the stage looking "rangerly" in full uniform including my impressive Stetson and gold badges and name plate, I read 3 poems to them -- poems written by black poets (I liked the Nickie Grimes poem best) -- and was well received. I asked as an opening how many poets did we have in the room? Three fourths of the children raised their hands. Great!

Then it struck me: This roomful of beautiful multiracial-multicultural children were only one part of what was before me. As I looked out at the adults in the room, I noticed (seated around the edges of the audience) that every member of the teaching staff and the few administrators in the hall were white. There were 4 African American mothers (the planning group), and one or two fathers.

I'd originally wondered how this assignment fit into my outreach role with the NPS but as the programs came to a close and the children filed out, the African American children and parents remained behind and gathered 'roun with their cameras. It was picture taking time and everyone wanted to be photographed with the park ranger.

I knew then why it was important that I accepted this engagement. In this San Ramon school on this day I was the only authority figure (besides their parents) who looked like the audience! Small wonder that I was feeling almost revered. They'd listened in total silence as I read the poems. It certainly was not because I was a reader of the caliber of Maya Angelou or Nicki Giovanni. Those young ones were awed by the uniform. Maybe (as I often suspect) my garb was announcing a career choice to some who might not ever have considered such. Something that was unattainable to me during my own childhood. I hope I never forget that; or of just how dramatically the world has changed.

The teachers had obviously done a great job in preparing their students for this day. It was evident in their responses. Yes, they were white teachers. But in these days of increasing costs of training -- fewer people of color are coming out of the schools of education, right? Maybe it matters not how open our institutions are to the need to democratize the teaching profession -- if only those who can afford to get into the colleges and universities get to become teachers and if fewer and fewer students of color can do so -- our good intentions will be pointless. Given the 52% dropout rate among minority high school students in this state -- what hope for change is there really?

I'm accustomed to occasionally working before school audiences in the inner city. How different this was. Appearing before an obviously middle-class audience of children who enjoyed privileges afforded by attentive parents and a good teaching staff -- offered a very different environment than some of the classrooms I've been exposed to in Richmond. It gave lots of food for thought on the long 45 mile drive home.

It felt good in many respects to have been a part of something of meaning to those children, and for that I was grateful. I'd had a glimpse of what is possible -- given enough resources, attention from parents with the time and the energy to participate in their children's school lives -- and teachers willing to go the extra steps to satisfy the need for cultural identification ...

It was another good day.
Posted by Betty Reid Soskin at 8:23 PM