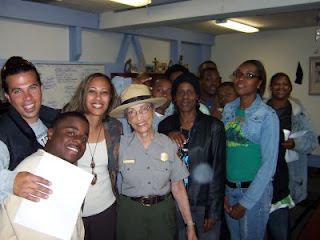 Leadership Group was a really good experience ... I'm growing as a speaker, I believe ...

They meet on Thursdays for an all-morning session for mutual support in the office of a progressive local real estate developer in the old historic district of Richmond. This is happening In the troubled low income, high crime, and long abandoned central district known as the Iron Triangle. They come together weekly to try to find their way back from various hard paths and -- in some cases -- paths into the main stream that some had never managed to find a place in ever.

Macdonald Avenue, the once abandoned old main artery that runs through the historic district is currently under major renewal and is fast emerging with some of its old glory; new streetscape with tree planting, street design which includes the undergrounding of utilities; the complete overhaul of parking and traffic-calming strategies; ornamental street lighting; new businesses and freshened facades on old ones. There are waiting-to-be-installed wayside markers created to tell the story of and make the connections with the WWII home front days, tying the historic district to the shoreline park sites.

Rhonda Harris, local contractor (in white sweater in the photo above), is "reconstructing" the lives of the people of the community in that it is she who has created this forward-looking "redevelopment project" of the human potential alive in the Iron Triangle. She is making a bold attempt at retraining those willing to give themselves a second chance at integrating into a social system they formerly opted out of for reasons often beyond their control.

As I slipped in as quietly as I could about fifteen minutes earlier than my scheduled talk. I could see that the room was filled to overflowing so stood with my back against the door to listen long enough to find the context into which I needed to fold. 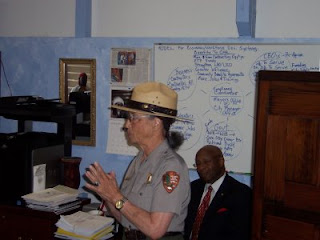 It was clear in only a few moments that many here were returnees from incarceration and that the very able instructor (motivator) was introducing them to basic civics; that their assignments (probably on-going) were to attend city council meetings and to find their way into civic political life as one way of getting their needs met through participating. He talked about requirements for job entry and employer expectations. This was basic and oft-repeated but absolutely necessary job-training information that most of us take for granted. The quality of the listening here suggested just how intent this (mostly male) audience was for re-entry into a social system they may have never have made it into -- ever.

After about 15 minutes I was introduced. I dropped my heavy bag on a nearby table, handed my camera to someone to document this day for me, and stood before this expectant group not knowing what in the world I could say to them. Closed my eyes for a second or two and it came. I opened with a sentence or two about the importance of "place." Of how often place determines how lives will be lived, and asked how much they knew about this place called Richmond? That led into the history of their grandparent's heroic achievements during WWII -- the building of those 747 ships in 3 years and 8 months by a never-built-a-ship-before cement contractor named Henry J. Kaiser and his crew of new-to-the-workforce women, former sharecroppers of every color, shape, and gender, that saved the world from domination by Nazi Imperialism. I slowly built the case and watched their surprise and pride grow as they listened intently. Few had ever heard these stories, or of their relationship to them.

The talk was no more than about 20 minutes in all, but what a wonderful morning it was! I may have started a small flame, and I'm hoping that (as promised) I'll be invited back to continue to build on what has been started here. There is every possibility that this park will provide enough inspiration and pride that men and women of honest and good intent such as those I met today will rediscover their legacy. They are the descendants of those hardy souls who crossed the country by whatever means necessary to become the mighty shipbuilders of the home front. How wonderful it would be if -- through this park -- we are able to help them to recapture that past and build a deep reverence for place. And wouldn't that be miracle, indeed?
Posted by Betty Reid Soskin at 11:58 AM