Life is moving by at such an accelerated pace that I think of things I must write about and before I can reach my computer 3 new even more exciting events are taking place ... .

First, there was a bus tour last weekend that brought together assorted folks from near and far (3 from Tucson, Arizona). It was the first tour I'd conducted for months -- not since we'd been overwhelmed with so many requests that we eventually found ourselves staring at a wait list of over 400 enthusiastic "tourists." Until about a year ago I'd been conducting interpretive tours with partners, but rarely alone. My work mostly consisted of the taking reservations and recording confirmations, etc., and going along as a kind of specialist on the African American nuances while Lucy or Naomi would mainly carry the interpretation. My work has recently become more and more centered in public speaking and community outreach.

At one point we were discovered by the press and several prominent stories appeared in the dailies and the race was on! We are so young in our development at this point that we simply lacked sufficient staff to accommodate the numbers we were attracting. Our little 15-passenger bus has to serve the four sites that operate under one management team and sharing it and a single driver became too much to cope with.

Over the past year our staff has grown a bit, and with new edges opening up -- we're going to try again. Though the respite may be short-lived since one of my tours this week, on Tuesday, was arranged at the request of the San Mateo PBS affiliate, KTEH, that brought a 4-person film crew to shoot the tour plus an on-camera interview that will be one 9-10 minute segment among others -- in a one-hour production being developed to accompany this fall's Ken Burns 12-hour special on the National Parks.

It was an intensive 5 hour period of being "on," but I do admit that I seem to be getting the hang of this D-List celebrity thing. I was relatively relaxed throughout, though really really tired when evening came. There's an emotional component to these things, I think. Kind of like that old primitive suspicion that the camera actually drains life from its subjects (the old theft of image thing). There may be something to that after all. I don't recall feeling particularly strained during the filming, but at the end of the day ... .

During the long day I became reacquainted with something I'd almost forgotten: It is that this park, unlike others in the NPS system owns nothing. It exists in the partnerships and relationship with the City, the Chamber of Commerce, local corporations and businesses, nonprofits and County entities. That being so, it's a park more closely related to people and their stories than to the sites and structures scattered throughout the city and named in the legislation. Richmond resembles Lowell, Massachusetts, in that respect. Lowell, also a waterfront town, was the home of the long-abandoned textile mills. Richmond holds the greatest number of WWII still-standing mostly abandoned structures in the nation through which to interpret the story of the emancipation of women, and the story of the greatest wartime industrial mobilization in the nation's history. Both cities were wounded by the passage of time and catastrophic technological change. Lowell has been reclaimed as a successful National Park site brought to live again as a performing and visual arts center. The city itself, is "the park."

What I rediscovered over the past week is how true it is that this park will be built one story at-a-time and that those stories are evoked in conversations as people remember fragments of the lives of their elders now gone. Each time something precious is revealed and another "park co-builder" emerges -- someone who promises to go home and root aro 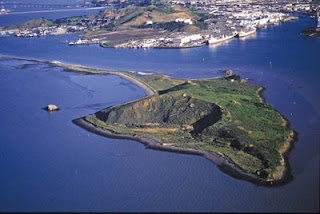 und in those old trunks and attics for more stories and artifacts. After each tour the calls and emails arrive telling me about a book I should read or deepening my knowledge about one or more of the sites we visited on our tour.

I learned, for instance, that Brooks Islands which stands only a stone's throw from the shoreline and -- which I've been describing as "the little island previously owned by Bing Crosby and Vic Bergeron (of Trader Vic's restaurants), and had been stocked with wild life to be used for target practice." I learned on Tuesday that this little island is not only a wildlife preserve owned and managed the East Bay Regional Park District (I knew that), but that it is also an important archealogical site, has a 3000 year-old history and was an important Ohlone Indian site. I learned that a retired researcher who engaged in digs there is now my age and living within the city still. ( did not know that.) Mr. George Coles may prove to be an important resource in the telling of the stories of this emerging national park. Brooks Island lies within a short kayak distance from the shores where our under-development Visitor's Center is located. It should be completed by the end of next year.

On a schedule a bit ahead of the park's, I think I've grown into my role now, and the work has taken on an importance and vitality that is truly rewarding.

Maybe that is worth filming, maybe.
Posted by Betty Reid Soskin at 7:20 PM