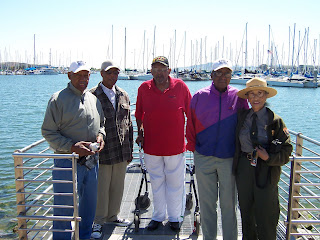 Yesterday brought the 65th anniversary of the Port Chicago disaster which took 320 lives, 202 of whom were young African Americans ...

On Friday I had the great honor of providing a tour of the Rosie the Riveter Memorial for a group of men (the "mutineers") who survived that tragedy and returned for this year's commemoration.

These are my contemporaries. It's so hard to hold that in mind when I'm surrounded by younger people most of the time. It all seems to have happened in the very recent past. There is the illusion that time collapses in on itself in some strange way (awkward wording but I don't know quite how to describe it). When I'm surrounded by those from my own age group, it's disorienting in some way and I have to remind myself that I'm now at the age where birthdays come every six weeks and that others are experiencing life at the same incomprehensible speed and with this same sense of urgency!

Prior to arriving to meet me for the tour, they'd traveled in a caravan consisting of two large vans and a sedan to the national cemetery at San Bruno on the San Francisco Peninsula where they'd visited the graves of those who perished in that conflagration on July 17, 1944. Yesterday I learned during the ceremony a fact long forgotten. It was that their graves are separated from the others by race. At that time no servicemen of color were buried with the whites, but were segregated into a section "for colored only", and not in some southern graveyard, but here in California where such practices were little known. Of course this would have happened before the desegregation of the armed forces so would not have been questioned at the time. What a cruel irony to revisit! We have so much still to atone for as a nation, don't we? As I've said before, if others will continue to work on atonement, we'll continue to strive valiantly to find forgiveness.

Yesterday about 250 friends and family gathered at the monument in a beautiful ceremony to honor those lost. (Numbers are limited by available space.) It was the annual Day of Remembrance hosted by th 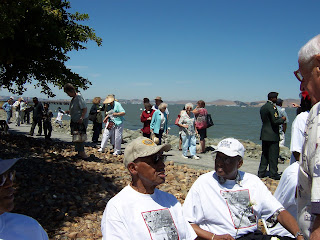 e National Park Service. State Senator Mark Desaulnier and representatives of all of our local, state, and federal elected officials were present to honor the day. Legislation is now pending in the Senate (after recent passage in the House) to raise the Port Chicago monument to full status as a national park. After introduction by Rep. George Miller in the House, Senator Barbara Boxer is carrying the bill in the Senate with passage anticipated in the very near future.

You must read University of California at Berkeley's Prof. Robert L. Allen's "Port Chicago Mutiny" for the story of the tragedy that occurred on that fateful day in 1944. It was the response to the subsequent mutiny trials of the men who refused to return to the docks to load ammunition without further training that caused President Harry Truman to mandate desegregation of the Armed Forces in 1948 by presidential order. By so doing he inadvertently ushered in the modern civil rights movement that would continue to build over the next 20 years into that which we now remember as the Civil Rights Revolution of the Sixties.

I am so proud of the role being played by the National Park Service in giving voice to the stories of our times without reservation, and for allowing the conflicting perceptions of what happened to resurface so that we can, black and white together, process that history and support one another in growing past the bitterness that has silenced our voices for such a long time. Let those conversations flourish now that we're able to finally bear the pain of remembering. The correctives are not yet all in place but the stage has been set for those exchanges to occur and for a purging of the debilitating hatred to be set in motion. 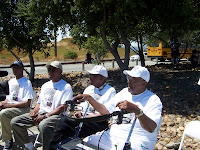 In January change could be felt in the air at the Inauguration. I feel it still among those who gather at our parks to learn of that history. I felt it again yesterday in that sterile Army building at Port Chicago that came to life again as a diverse group of people came to remember, and to honor by their presence those fallen young heroes long since dead. Our numbers now including the men who came to add their voices -- now aging but still proud of what their standing tall initiated for us all by their honest defiance of that shameful unenlightened past that we've somehow managed to survive into a more promising future. I'm told that only six remain, most of whom traveled from great distances to be with us yesterday. We were deeply honored by their presence.

Incidentally, I was reminded upon seeing him again among the visitors yesterday, that Dr. Robert Allen was one of my guests on a July 15th bus tour of the Richmond park sites. Rather than feeling intimidated by his presence (as one might expect -- given my amateur status as a scholar), it's interesting to note that I came away from the tour feeling affirmed as "historian." One day I may take those quotes away and declare myself (grin).
Posted by Betty Reid Soskin at 10:54 AM