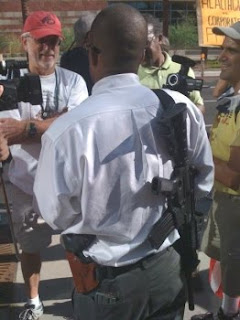 But the irony was inescapable -- of the young black brother decked out in his strapped-on shoulder holster assault rifle plus his openly displayed revolver; given that history. Out of what rabbit hole do you supposed he climbed? About the time that his image slid into view -- being interviewed by a white dude with a revolver strapped to his leg(!) -- I found myself giggling helplessly! Testosterone on the rampage! What in the world? It was about at that point that the "deja" became completely unglued from the "vu" and I lost it! Maybe laughter is the only defense reasonable folks can have to such behaviors; but surely that isn't enough. Something critically important to our survival may be at risk here; something activated by decades of unending war and ceaseless urban violence. Have we become so desensitized that we've lost the ability to respond appropriately? This morning the grin has disappeared and my skin crawls with fear for what may lie ahead ... .
Posted by Betty Reid Soskin at 9:03 AM