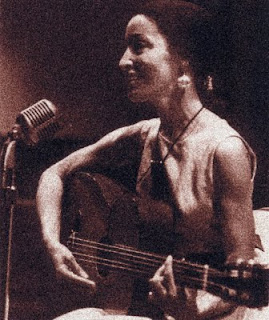 I've been side-tracked ever since entering the lyrics to Ebony more than a week ago ... .

It occurred to me that somewhere in the blogger help feature I'd seen the instructions for adding audio to a blog. Suppose I could fix it so that the song begins as the button(?) is pressed. I happen to have in my I-Tunes library several songs I've written -- sung at different times under differing circumstances more than 40 years ago. I stopped long enough to listen to myself singing.

I've captured an online MP3 player and added it to my desktop along with the song I'd stashed in I-Tunes - but that's as far as I've managed to get in the process.

If you can dwell for just a minute on the pure magic of being able to listen to one's (much younger) self singing before an audience with the applause in the background as the song ends -- to drop back into your own history to such a moment ... well. It was something I'll not forget soon. I was mesmerized by my own voice. I felt no particular relationship to this young voice, though I knew it was mine. I was moved by my own singing ... how strange. There was no ego. I judged "her" not, but found myself able to just listen and be caught up in her music without the need to either cringe or exalt. Just to be with my younger self. What a rare experience to live myself into.

Then the frustration set in as I tried to figure out how in the world I could add that music to the blog entry so that you could hear it, too. The instructions were simply beyond me. The technical words meant nothing; it was about then that I realized how far out of my generation I've been living and working.

I then got lost for days and days in trying to decipher the language of the audio instructions, and nothing else mattered. If I continue to record my thoughts, that particular entry will move down the page and get lost in the archives before I figure out how to bring the song to life with sound. The little poem holds little meaning to me without the voice and the music, and all of the color drains away from the empty words on the screen.

(Use the link on the left just under my photo where it says, "email me.")