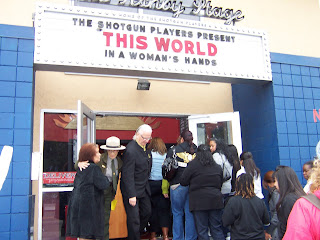 Joined with Susan Wittenberg (assisted by Barbara Johnson of Rep. George Miller's staff) of Building Blocks (a nonprofit affiliated with Jeffrey Canada's "Zone" program out of Harlem) to provide for a group of local youngsters their first experience of live theater. It was a smashing success! They loved every minute of "This World in a Woman's Hands" and so did we. 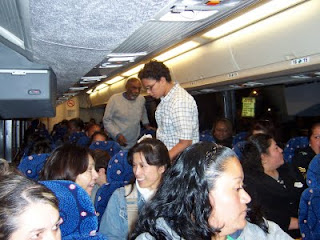 Ranger Elizabeth Tucker and I served as chaperons; giving the on-the-bus briefing and serving as interpreters for 56 youngsters and some parents. I could overhear many Spanish speakers as I moved through the group, so have no idea how much may have been lost in translation; but for the sake of their kids, it may not have mattered.

I can hardly imagine a more rewarding Sunday afternoon. The kids were ages eleven through high school age, and as well-behaved as any group we've ever accompanied.

It was pleasing to note that not one word of the script was altered because the audience was young (there is some profanity), making it clear that this was a grownup experience not watered down in any way for them, thereby honoring their ability to deal with it.

I noticed in passing, though, that during the Q&A with the cast after the performance and during the de-briefing en route home only the boys asked questions. Though the girls outnumbered them by far, all were silent. Is this a teen thing? I can't recall at what age I became assertive. The boys were not only highly verbal, but their questions had an aggressive quality -- and were not always on target. There's something about the need to establish a male presence that dominates. Will be interested to learn how others read this. 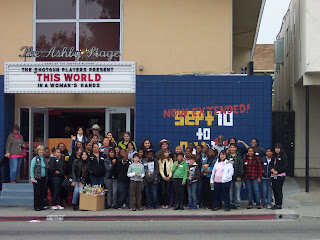 ers donated their Sunday afternoon performance to these children of the troubled Iron Triangle district of Richmond, including the rental of the huge bus that brought us to Berkeley which was donated by one of their benefactors. We shared a light dinner on the trip to Berkeley (sandwiches and fruit) courtesy of Building Blocks.

I've now seen this amazing play enough times to be able to understudy all nine of the roles, I suspect. And each time I've seen it I feel enriched by the truths this remarkable work reveals. I feel affirmed in my efforts to support those revelations in my work as an interpreter of that historic era.

I'm hoping that these children will grow into this experience; that they will understand gradually but in significant ways, that many of them are the descendants of those heroic characters so richly drawn by playwright, Marcus Gardley. The frustration is that I'll never know if we're making a difference, certainly not in the immediate future.


This week our staff will be meeting with a film crew from the east coast who will arrive to spend 3 days with us developing the scenario for the National Park Service film to be shown in the Visitor''s Center when completed sometime within the next two years. Found myself wondering how yesterday's experience will inform that work? If it doesn't, then perhaps we've missed something ... .

Photos: Remember; these are thumbnails and clicking on them will expand for better viewing.
Posted by Betty Reid Soskin at 11:18 AM