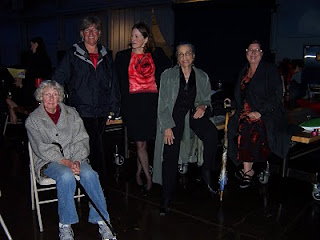 Photo:  The lighting didn't allow for a decent image, but here are a few of the cast (that's Martha Lee, Park Superintendent (and my boss) standing in the back row on the left side.  When I hesitantly told her while we shared lunch one day, "...I'm in the cast of The Vagina Monlogues." Rather than gasp in shock, her response was, "I'd LOVE to do that!"  "I'll inform the director," says I, and the rest is history.   She's terrific!  If you'll click on the photo it will enlarge and become clearer.  Left to right, Carolyn whose 80th birthday is today, Martha Lee, Shirley Butt, moi, and Michelle Itagaki.
Posted by Betty Reid Soskin at 10:40 AM