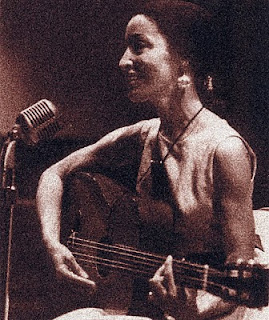 you'll notice that it ends abruptly with the line, "...if you would only see;"  and thereby hangs a tale:

There are only a few lines left to sing, but they are key to understanding the intent of the composition.  At the time that the song was written (at least 40 years ago), though I was fast-becoming a prolific composer and performer of a body of songs that were having a profound effect upon the small audiences exposed to the work, that song was rarely included in my programs.  The reason being that -- though it signified a place where I'd come to terms with my own complex racial background -- I was painfully aware that audiences were just not ready for those racial lines being crossed, and surely not advocacy for miscegenation.  And perhaps that is still true ... .

This song evolved after I'd written a number of others that rose out of personal experiences of the Civil Rights Revolution of the Sixties; some expressing bitterness and pain that surely reflected that era.  But this one signified an end to my personal struggle for identity in a world that demanded that I choose sides that would necessitate denial of my own rich heritage of generations of courageous ancestors who dared to cross over those lines of separation in pursuit of lives of love and meaning.  I'd decided that it was not that I was 'nothing' but that I was "everything," and that someday the world would come to terms with that reality, too.

The last few lines of that song -- following the line, "...if you would only see" are

my Brown is at the heart of it

and blending was the start of it

and someday it shall be

that blackness and the white of us

will be the day and night of us

and not the wrong or right of us --

I'm choosing to believe that a possible explanation of those lines being omitted had to do with adhering to the necessary time limits for each segment of the bios of the honorees, and that it had nothing to do with censorship of the content.  But -- if it did -- what a rich discussion must have ensued among those young women in producing the video!  I'd love to have been a part of that.

Photo:  Press photo taken in concert in Cleveland, Ohio, during the turbulent Sixties.
Posted by Betty Reid Soskin at 8:45 AM