Oh, before it's forgotten or pushed back because "Life" has gotten in the way ... .

I need to tell you about filming yesterday at the Rosie the Riveter Memorial:

Some weeks ago I was introduced to Kendall Wilcox, Executive Producer from BYU Broadcasting when he visited our offices in Richmond.  He was working on a documentary series entitled "The Generations Project"  (a program based on tracing family histories) which is being aired on cable channels nationally.  This segment is about an African American woman who was one of the migrant workers who arrived in the Bay Area as the result of the Kaiser recruitment efforts that swept through her town in Louisiana during WWII.

She's a very interesting subject who had survived the times and actually prospered after the war, becoming a property owner; operating a nightclub in San Francisco, and eventually becoming a political and labor union activist of some prominence before suffering a tragic end as a homicide victim in mid-life.

It was decided that -- because of our being contemporaries and both African American -- I might be able to provide context for Bessie Colvin's story by being filmed in conversation with her son (through whom the family narrative is being told). 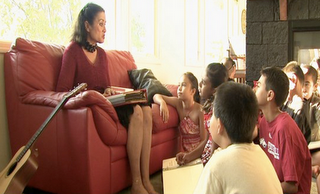 It was a fascinating experience in that -- though I'd been interviewed on camera fairly often in the recent past, never before had I participated in this kind of in-depth production.  The camera crew was led by a petite young woman who obviously had the entire script in mind and could envision the final product.  We filmed for several hours (though it seemed far less), and the "star" (Colvin's son) proved to be a warm and easy partner who made the adventure completely effortless.  It only took a moment after we were introduced for our souls to touch and -- if the result of the piece turns out to be as warm and comfortable as it felt -- the day went well and the production will be just fine.

The show will be aired nationwide in October.
Posted by Betty Reid Soskin at 10:31 AM