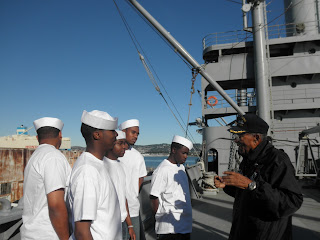 Too many things going on ... all important and all extremely exciting.


First there was the afternoon of being a "go-fer" for the cinematographer who is creating the film for the Visitor's Center for the newly-established national park at Port Chicago.  What an experience! He was filming 5 young African American youth who will be the surrogate images for those 202 who were lost in the greatest homeland loss of life in the WWII explosion of July 17, 1944.  They will give us the human faces for that tragic story. 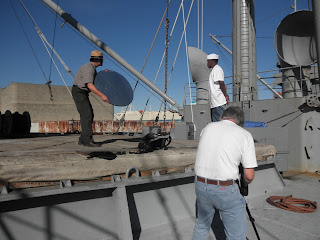 I've been involved in just enough of the process to know that the story is in good hands; that (in my humble opinion) those are the hands of sheer genius.


I sat with him the day before in our conference room -- in complete darkness -- while he ran the rushes of the work so far on his laptop.  He was sitting at my elbow speaking in a whisper while describing what the visitor will bring into the room and how he was hoping to shape their understanding and experience through his film.  There were few images, only his voice and the sounds he'd created through which to tell the story.  It was a brief ten minutes in that darkened room with only his soft voice feeding my memories and imagination.  When it ended I was quite literally in tears ... .


On the next day we went to the SS Red Oak Victory with the youngsters outfitted in plain white tee shirts and sailor hats -- where Doug shot his photos under a magnificent blue November sky.


Those youngsters will be heroes in their Richmond community when the film is premiered.  They will be immortalized on film for as many years as the Visitor's Center at Port Chicago stands as a memorial to those lost lives.  I wonder if they have any idea of how important today may become in their lives over time -- as a kind of marker which placed them in the continuum of the African American story?


Ranger Ed Bastien of the Port Chicago National Park, seen on the deck working with the cinematographer casually recounted the tragic story to them as we gathered on the dock before the work began.  In a brief conversation as we approached the gangway to the deck, I remember mentioning to Ed how I am becoming aware of the need to edit my remarks when speaking to young people about those cruel times in American history; lest I increase their disaffection and fuel the quiet and justified rage that I sense they're unconsciously bearing.  It's a new awareness on my part -- I, who has always prided myself on candor in such conversations --  at least with adults.  I must remember to bring this up when we interpreters gather to learn from one another.  What is it that I'm picking up in these more frequent encounters with the young that suggests a need for caution?  And is restraint called for where the up-churning of that painful history (though true) might do unintended harm?  Is it ever wise to curb truth?  But then truth is subjective, isn't it?  Maybe reminding myself of that fact is when the doubt creeps in ... .


Wish I could have been around when those young men discussed the experience later.


They 're so young ... just as those young sailors were who haunt my memory in the quiet moments ... still .. after all these years.

Photo:  Chief Engineer Bill Jackson, 90 year-old veteran of the Maritime Service and of WWII showed them how to "square" their sailors caps while waiting between shots.