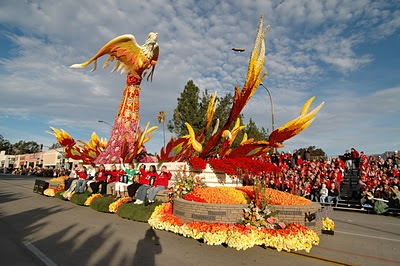 ... and after viewing the crystal ball drop over Times Square repeated ad nauseum (why is that anyway?) and a good night's sleep, I've risen to a new day and year and a calendar that would make any other woman of such advanced years envious in anticipation.   Besides, I'm a pushover for the Rose Parade, and this one is everything that the active child in me could wish for.

What other woman of my age is looking forward in the months ahead to ...

I just don't see any time or space for being depressed, do you?  Besides, the fantasy of the BYU experience causing me to (after death) find myself wandering aimlessly -- halo leaning noticeably leftward -- as a displaced black UU illegal alien in a Mormon Heaven sends me into spasms of long suppressed giggles -- the ultimate defense against accumulated sadness.  And, wouldn't it be great if we could save up giggle energy like rollover minutes as insurance against the dark times?

Besides all that, Dorian is at this moment watching the Rose Parade emanating from Pasadena and as I watch her delighted expression, a kind of peace descends. Mental retardation has protected her from having the ability to project into that future that I'm so fearful of on her behalf and for that I'm so grateful.  I worry enough for us both.

If we're lucky, her mother will be so busy dispatching life as it evolves that hovering over her  -- sending negative vibes -- or at least neutralizing them into some harmless form (as before), and her healing (now fully underway) will continue. Her life will be whatever that dreaded "unknown future" delivers despite my best efforts to see behind every obstacle along the "Road of Life."

Despite that formidable listing above, Life surely has its way of keeping even the most celebrated of us humble. And deserved or not -- I'm finding that I'm often now reaching out for "celebration" as a defense against the overwhelming unfairness that shows up clothed in that velvet cloak of realism gone deliciously and capriciously mad!  And, no, logic is no defense.

On this first morning of the new year, I'm feeling both -- celebrated and properly humble.  And, oddly enough -- lifted from the gloom of yesterday and looking forward to tomorrow with an eagerness that has been lost over the past several weeks of the Christmas blues entitled "Missing them.".