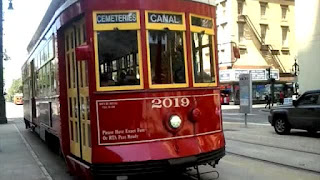 ... that I've forgotten to mention a very significant invitation that arrived last week in a phone call from the National World War II Museum in New Orleans?  Mr. Jeremy Collins wanted to know if I'd be interested in participating in a conference in that city on December 6th, 7th, and 8th.  Would I?  You betcha!  I will be sharing the dais with Emily Yellin, journalist and author of "Our Mother's War".  We will be the two female panelists, among others.  We've met before when she served as keynoter for a Rosie Trust banquet a few years ago.  We share a Unitarian-Universalist background.  It will be great to see her again.

As you know, if you've been reading my journal for awhile, this is my ancestral home, and I've not visited for at least two decades.  There are many Breauxs, Allens, and Charbonnets still living in the city, and this will be my first post-Katrina tour of the old Tremé neighborhoods where my father grew up, and from which my own family escaped after the disastrous floods of 1927 that brought us to the West.

All permissions have been granted, and anticipation could hardly be greater.  An opportunity for a grand reunion? Maybe.  I'm sending out the call to the family and we have several months to save up our pennies and plan for a gathering of some sort.

Small wonder that I go around breathlessly these days.  Life is moving so fast and furiously, that one can hardly maintain the rhythm!

... but in that regard, this week I have tickets to hear Dmitri Matheny and his band at Yoshi's on the Oakland waterfront with my jazz friend, Anne.  An infusion of jazz tends to provide an essential and stabilizing element when life becomes overwhelming -- as it is in this period of updraft!