I cannot recall ever being as depressed about the state of the country and of our government-- even during the Sixties, when at least there was a feeling of change in the air,  marching in the streets. and the visible push-back from the American people through every cultural form then in existence.

I really have no idea where we go from here, but the feeling that Congress is acting on at least two levels, both of which are encoded so are impossible to deal with -- and that increases the sense of hopelessness. It's as if the real problem is simply that this young president is not to be allowed the most obvious of successes, even if it costs the lives of our people -- and the honor of the nation. How can this be? Yet, we dare not call it what it is; the unexploded ordnance from the Civil War.

It is as if there are those in the Congress who've decided that -- "just because he has cleverly found a way to actually be elected into the highest office in our land -- and therefore into the position of world leader, this president must not be allowed to actually govern.  This may be our last chance to stop them."  When the opposition speaks about taking back the country, this is clearly what is meant.  No other explanation makes any sense. 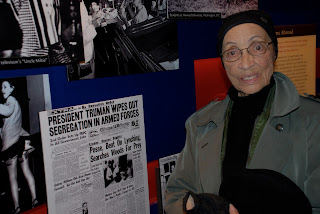 Been reading Rising Tides:  The story of the 1927 Great Flood of New Orleans, and getting a close up look at a period in our history when at least 50 black people were being lynched annually throughout the southern states  prior to the great migration of WWII.  The accounts of those killings are horrifying!  Such hatred dies slowly, and the remnants are evident in the encoded language of our day.

That, added to the fact that every Thursday afternoon I'm in the theater with (internee) Flora Ninomiya as she presents the short Japanese American Citizens League-produced film, Blossoms & Thorns, the story of the Richmond rose grower families who were imprisoned in relocation camps during the war.  My awareness of those human rights struggles are being refreshed constantly as I watch the story unfold to a new generation of viewers from the darkness of our little theater.

Included in the telling of that history is the fact that our government awarded $20,000 to each internee as reparations for the shameful disruption of their lives caused by an irrational national fear and panic later judged in error.  Though moneys could not possibly compensate for their losses,  it went a long way toward healing their wounds that the award was accompanied by a presidential apology.

Find myself wondering what happened to our "forty acres and a mule," and if we had processed the Civil War and the 300 years of enslavement of black people by awarding every African American an education through college without cost -- as reparations -- if America would have grown past this seemingly insurmountable barrier of white privilege and ignorance by now?  But this presupposes that the problem lies with us, and is not rising from the underlying problems associated with the continuing curse of White Supremacy that continues  to dominate our political life, making constructive change almost unattainable.

... but maybe that's a discussion for another time when we've stopped the festering ... .