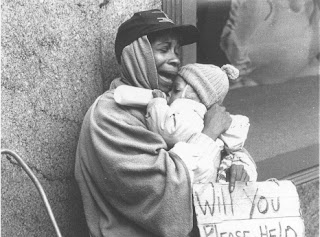 I recall stifling a grin when Papa George explained his third wife, Louise, in these words ... .

"Some things you just gotta have in order to know you don't need!"

Given the chasm that has developed between the haves and have-nots in this country -- one can hardly imagine how we're going to save ourselves from the doom of environmental disaster being brought on by our country's excesses.  It is we who have consumed the King's share of the earth's resources over time, and it is within our power to try now to trim our needs to what is more equitable for the sake of humanity.

And ... there's a racial factor here in that so many people of color have been held down for so many decades that a backlog of wants and needs has developed through advertising and incessant promotional campaigns, and that we're now being encouraged to set aside in order to save the planet.

White folks tell us that many of the conveniences that we've been educated to see as essential are not.  We're being told that we not only don't need them, but that we must now simplify our lives by living in more sustainable ways.  "We've had all that stuff, and we know that you don't need it -- not only that, but your having it will put us all at risk of losing our space ship, Earth!"

I'm not sure just how well that's working out for us ... 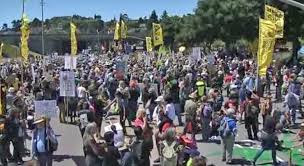 From the look of the photos taken at the protest march from the Civic Center to the Chevron Refinery in Richmond yesterday, not as many African Americans as one might expect in a city with a 25-30% demographic were among the 1200-2000 passionate activists in that crowd.  Hope I'm wrong.  We've got work to do, environmentalists, and, unfortunately, the debate is shaped by decades of greed,  unequal opportunity, and access that precedes our recent urgent concerns about survival of our species and sustainability of the planet.  It won't be easy to undo an international appetite whipped into a frenzy by corporate power and that has now grown out of control.


It will be difficult, indeed, to convince a family without a roof over its head that sleeping under the stars is a privilege to be savored.


We have generations of folks, worldwide, who have yet to learn the lessons of Papa George's at least one too-many marriages.
Posted by Betty Reid Soskin at 3:51 PM