I can't remember a time when I've felt more conflicted ... . 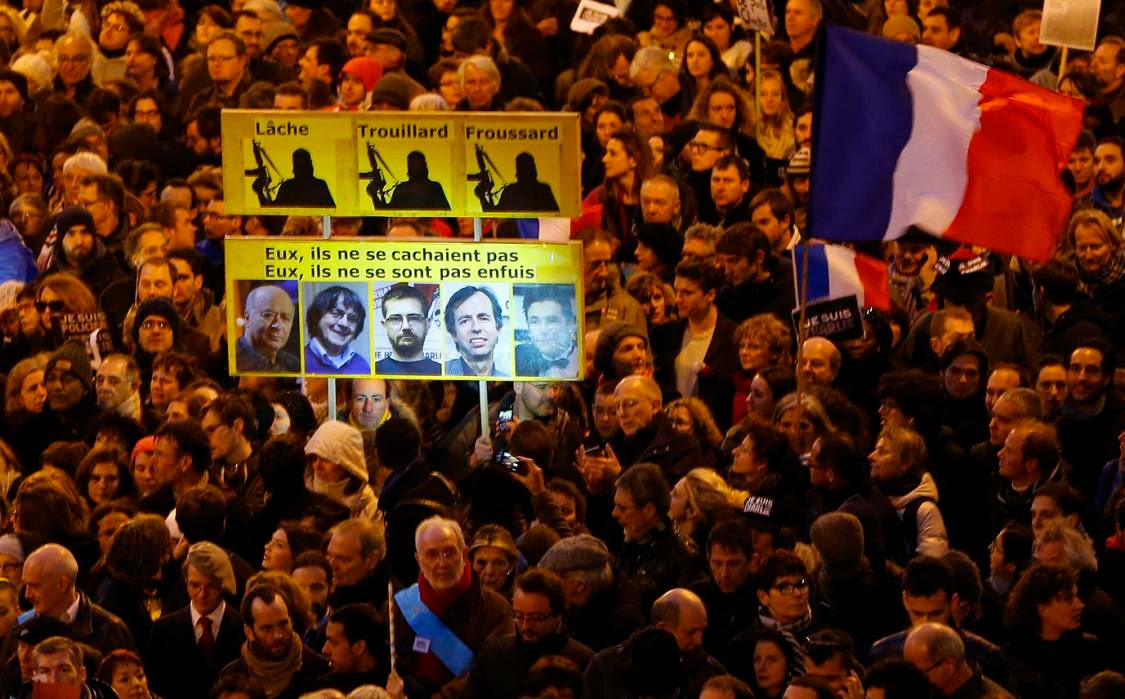 ... hardly sleeping since the cruel murder of those 12 satirists of Charlie Hebdo in Paris, and the others who were so tragically and needlessly sacrificed to ideological differences.

As a native-born American deeply embedded in Western culture, the concept of Freedom of Speech is solidly ingrained in my DNA.  My evening ritual is to watch Jon Stewart defame all that we hold sacred on his show.  Along with many I, too, can claim to viewing much of my news through that Daily Show prism, and am grateful for the chance to do so by right of our Constitution and Bill of Rights.   I'm not sure I could live through some of the headlines we're subjected to without having that response shaped through Stewart and his troupe of "correspondents" pointing out the inconsistencies and foolishness in the behaviors of some of our leaders.  They make some of the blatant insults tolerable because it's obvious that others see them, too, and I'm not alone.  That's unarguable.

So what's the big problem?

The suspicion that somewhere along the line under those "rights," it's possible to drift across the line into hate speech.  After viewing online some of the drawings that were seen by some to be offensive enough to warrant being addressed by gunfire, I found myself wondering what would have happened had those offended been (as I am) African American, a people subjected to unspeakable cruelty and injustice over centuries -- would I have been able to tolerate the disrespect of my religious figures as an expression of someone else's right of free speech?  I'm not all that sure.   I find myself, (timidly) identifying with those offended.

Under that same writ -- I have the right to confront my offenders and/or find redress for grievances  and without paying a penalty for doing so.  It took a long time for social evolution to make that possible even in this country, though we've been moving toward that goal for many years.  That right is respected subjectively, and is still available only to those with enough courage and the resources to demand it.  In the Islamic world, many are not yet aware of or capable of adopting such a concept, and have little reason to do so without risking the destruction of their world as they know it.

I suspect that the other side is weighted by an opposing factor, that of White (Western) Privilege.  I doubt if any of those satirists at Charlie Hebdo were from the Muslim community. Were that not so, some sensitivity may have been introduced long ago, and the carnage might never have happened. People rarely exploit friends or their belief systems where caring relationships exist.  One would never ridicule Great Aunt Harriet for falling to her knees and lighting a candle before her home altar in the hope of the blessings needed to face her uncertain tomorrows.

I fear that this case was tainted by western privilege, and a monumental lack of sensitivity, or it could simply not have happened.

Stewart is just as apt to hold up his own Jewish culture for derision, but in a loving way.   Aasif Mandvi is often found in an Arab-based skit that's delivered with both substance and wit.   And we're just as apt to laugh along with both in those instances.  The amusement is present when we're experiencing the satire from inside the circle and no one is having to feel laughed at.   Or, when the subject is able to see him- or herself satirized and learn from the piece something of value.  I've seen even our presidents join the laughter when appropriate, and later incorporate new views of themselves into their presentations.   The Daily Show rarely is mean-spirited, though it goes for the big laugh in ways that bite! The best of satire is most effective when it holds up for ridicule the foibles that we can all recognize as human.

Maybe we need to debate the issues and try to determine just when satire and hate speech cross over into something unspeakably cruel and irrational.  Our future may depend upon our ability to do just that.

Of course, nothing could possibly justify taking lives for the sake of political or religious beliefs.

... but then, as a wise teacher once told me long ago,

Every culture has beliefs for which it is willing to kill or die, but by which it refuses to live.  We are no exception to this maxim.


Christian or Muslim, Jew or Gentile, Agnostic or Atheist, whatever one believes to be the fundamental Truth -- it is impossible to share the planet without the separation of church and State.  Theocracies lead us into No Man's Land, and work against the international unity we must continually re-create or risk international ruin.

Maybe, but it seems as I grow older that -- after due consideration -- truths are often elegantly simple, and as often as not -- are made more complicated by being over-thought.

I frequently check your blog to see your views on things. I've commented at least once. You are obviously highly intelligent and your thoughts are eloquently expressed. I am a 66 year old white woman and yet we see the same points of view. I found Jon Stewart within the last few years. My reaction was identical to yours; it felt good to know there ARE.others who see things as I do. I have family who think I am "too liberal" The quote is powerful and so true. I was unfamiliar with it. Thank you for being willing to share your thoughts and your questions.