Because the subject came up during an interview after my talk last week, I find myself thinking about feminism -- and why my coming to terms with it was so late ...

... but with some background, maybe my case can be made.

When the women's movement began to hit like a juggernaut in the suburbs where I was living in the late 60's through the 80's, it tended to skip our address.

My world was peopled by middle class and upper-middle class wives and mothers of absentee upward-mobile husbands, and the air was filled with bitterness and resentment as the controversial book, "Feminine Mistique" hit the market.  At the time my attitude was much as it is when Rosie the Riveter is mentioned in my world of today.  In my life it was simply a non-issue; a white woman's story having little to do with my life.

Truth was that the oppression I experienced was not coming from the men in my life (father, uncles, husband) who were living under the same oppression as were we.  And ours was from the white world; and mostly from white women.   I'd had little occasion to interact with white men.  Neither did my mother nor my aunts since their roles in life, historically, involved working in private homes and being supervised by white women.   Our uncles and fathers were of the service worker generation with few if any positions open to them above that level, so racism was a strong factor in their lives.  Ever since slavery this had been true.  As women we were aware of the degrading hoops our men were forced to jump through in order to support their families. 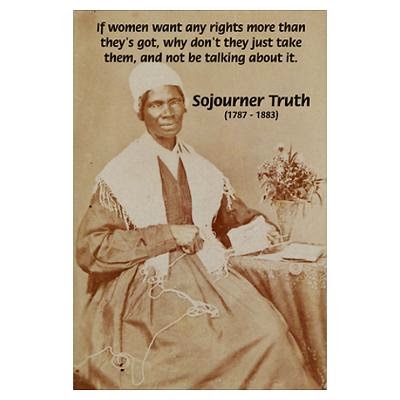 This being so, the memory of the Sixties civil rights revolution was marked by black women being sensitive to the plight of black men and at that time there was a resistance to stepping up in front of our men or to compete for power in society where we might be called upon for leadership.

I remember that in the late Sixties while attending a national black power conference in Chicago the opportunity to become a part of a national board upon which I would be the only female -- and that I refused to accept the role while feeling that I was more than qualified to do so.  It was the Black Caucus of the Unitarian Universalist Church, an organization that had gathered together about 500 black intellectuals -- mostly humanists -- from throughout the country to struggle for equality within the predominantly white denomination.  I'd gone there with the full support of my local church which funded my participation though I was one of only 3 black members at the time, I believe.  At the time the conflicting goals of racial integration and black power were under intense scrutiny, and I was right in the middle of the debate.

The second year we came together in Cleveland where the Black Caucus was registered at the same Hilton Hotel as the general annual conference of UU's, but we were not meeting with the full body while making our claims for political and denominational power.  We met separately for several days, with our black men negotiating behind closed doors with the general body and bringing back reports of their progress to our caucus.

At the final plenary session our issues had been successfully negotiated, and our caucus was to open to celebration.  Mind you, black caucus women had participated in few if any of the negotiations up to the time, and were busy doing the behind the scenes "grunt" work and planning the caucus celebration in our self-segregated separate-but-equal hotel suites.

The hour came for our victory party.  We found ourselves sitting in small groups chatting nervously whatever nonsense came to mind as the clock ticked mercilessly on as we anxiously waited for male friends, co-conspirators, and husbands to join us.  I remember the heavy unspoken feelings of embarrassment as the ice melted in the punch, the brie began to melt into formless blobs, and the icing on the brownies grew sticky and stale ... .  Unfortunately, our men had opted for the "white" parties in other places in the hotel where the young white women they'd charmed during the week were waiting.

The evening just before leaving the conference I participated in an encounter group session called by the emotionally-bruised women.  There was a highly volatile confrontation with the men.  It was one of the most intensely-charged meetings I've ever experienced.  I cowered in a dark corner next to my friend, the late Henry Hampton (of Blacksides Productions that produced the highly-acclaimed Eyes on the Prize for PBS) who, along with several other men, shared the outrage of the tearful sistahs.  The men were petulant, defensive in the face of the brutal honesty of the women, and on an ego-centric high from their conquests.  Little of value was achieved that fateful night, and it was a prelude to the many break-ups of relationships and marriages over the following decade.

Long into the years after the women's movement was formed, memories of that evening continued to fester.  I was aware that -- as we'd stood aside to make room for our men to gain their rightful leadership roles in the workplace and in society as-a-whole -- it was often white women who unknowingly stepped into the leadership vacumn we'd deliberately left unfilled.

Early in the Movement, as white women began to crash through the glass ceiling, black women were hired to take care of the newly-abandoned households and children in order to enable former housewives to take their places around corporate boardroom tables, so there was a lag between white and black women's ability to access economic and political power.  It was eventually noticed  that black women were slow to enter the Movement and that far fewer were hired into domestic roles, as those roles were gradually and systematically taken over by undocumented immigrant women who were willing to work for less in exchange for the promise of eventual sponsorship by their employers. Despite the fact that this was a different cohort of black women, this meant that the low-skilled jobs previously filled by poorly-educated black women were no longer available with huge economic impacts to their families and communities; effecting all black lives.  Black women, in general, were again pushed to the bottom rung of the economic ladder for reasons beyond their control.

Today, with such a high percentage of black males being caught up in the underground economy fueled by the drug trade and imprisonment (and those not being claimed by Kardashian women), they are far less likely to be candidates for marriage.  Black women have had to achieve financial independence through continuing education and greater job opportunities.  Many have successfully done that, are becoming accomplished in every field, and are single mothers by choice in order to live a more complete life.

The case for a delayed entry into Feminism may be the main reason that I'm so turned off by the identification of my role in the home front story as a "Rosie the Riveter."  I believe that there is still some residual pain that has persisted into these years, and that continues to prevent a full-fledged alignment with the cause of women's equality though, intellectually, I see the need for achieving those rights in order to have a more fully balanced society.

As long as white women are seen as the generic woman and all the rest of us continue to be seen as "somethin' else", my personal view of that reality will probably remain unresolved.