Received a large FEDEX packet at the end of last week ... Julio had thoughtfully set it next to my computer to be discovered... .

Love receiving unexpected packages ... this one was very special.

Opened it to a 2-page letter that, in part, read,

"On behalf of the Board of Trustees at The National WWII Museum, it is my honor to share that you have been selected to receive the 2016 Silver Service Medallion at our American Spirits Awards Gala on Friday, June 10, 2016 at the Museum in New Orleans."

The American Spirit Awards celebrate individuals and organizations whose work reflects the values and spirit of those who served our country during the World War II years.  We honor those who inspire others through their own acts of courage, sacrifice, initiative and generosity - particularly in the areas of leadership, service to country or community, and education." 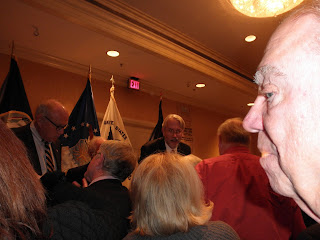 It was in December of 2012 that I served as a panelist for the Museum's annual convention in New Orleans; an unforgettable experience.

Met the iconic leaders and heroes of the period in a memorable setting on the edge of the old French Quarter of New Orleans -- the ancestral home of both my maternal and paternal lines -- the Breaux/Allens and the Charbonnets.  Can you imagine what this will mean to those relatives still living in this historic city?

Can't wait to tell them!

Now I'm being invited for a reprise of that experience, and this time as an honoree.

Among former recipients on the list are Major Norman Hatch,  Senator George McGovern, Harry Connick, Sr., Senator Robert Dole, Carl Reiner, Rear Admiral Robert F. Duncan, and a score of others too numerous to name.  It's interesting to note that -- on a list of 30 there is but one other woman, Elizabeth Dole, in 2010.

I will probably spend the rest of my life figuring out how in heaven's name I ever got on this list! Not complaining, mind you, just wondering ... .
Posted by Betty Reid Soskin at 11:59 AM