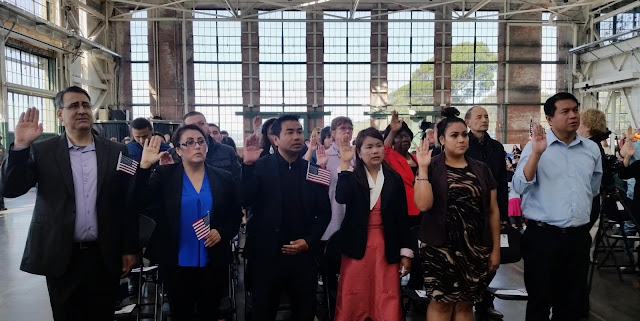 Naturalization Day was as moving as ever ...

... and, as before, there was a perceptible rise in my patriotism quotient as the tears gathered at the sight of those open and engaged faces from far off lands.  There's nothing like that experience to rid one's mind of the recent week's awfulness spewing uncontrolled from the media around this year's presidential campaigns.

I wish there was a way to send each aspiring presidential candidate back to whatever educational institutions that might be up to the task -- to try to cram into them the defining principles that so many have died to protect and preserve over all the years since 1776!

In looking down on the gathering of 51 new Americans being welcomed into citizenship in their new nation -- it occurred to me that any one of them could probably teach almost any one of our candidates a thing or two about what it means to be an American.

Overwhelming was the image of the countless millions of refugees fleeing their countries of origin over past months, only to find themselves wandering a frightened and defensive world, hoping to find a place on the planet where freedom of or from can be found.  Those before us in that beautiful sunlit space in the Craneway Pavilion represented only a fragment of those seeking asylum and asking little else.  These new citizens had found their way to our shores after who knows what might have had to be overcome?  In some cases, they've been studying for a decade or more toward this day of acceptance and affirmation.

It was such a honor to stand in the receiving line and to shake the hand of each of the 51 as their names were called and they received recognition and a warm welcome as fellow Americans, all!

Here in our country -- in today's political climate, depending upon skin color, religious affiliation, gender identification, their fate might well be determined -- not by the American experience described in the literature, movies, and catechisms brought with them -- but by policies that will be introduced and enacted by one of those seeking the office of the Presidency of this nation and Leader of the World even as we speak.

For their sake and our own, may we choose wisely.