A few weeks ago -- from an unexpected source -- I felt my veracity challenged ... 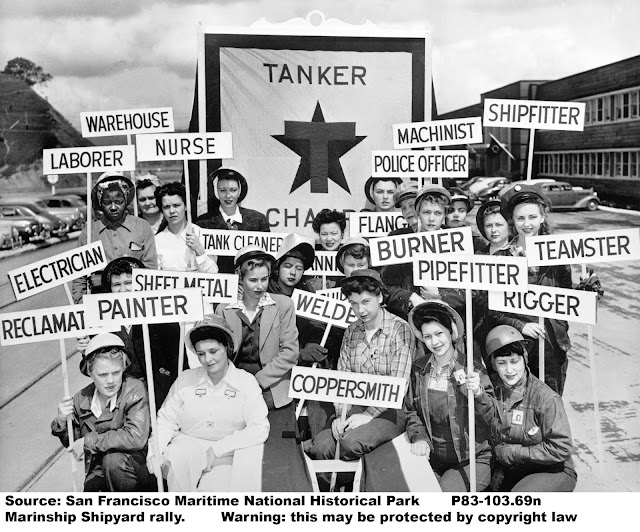 It was disturbing... disappointing.

Maybe this is the reason that I was catapulted back in time to the Betty in the previous post, at the nadir of life.

It was on a Facebook post that my friend stated publicly that,  "... though Betty states that during WWII black women were not hired as welders until late in 1944, I know that they were hired in 1942  because ...".

She was referring to a strong activist African American woman, Frances Albrier, I'd known in adolescence, and another who was one of the early and effective lobbyists for the establishing of Rosie the Riveter/WWII Home Front National Historical Park, Ludie Mitchell.  I was aware of both these women as having been early shipyard workers -- but far from the norm -- both were feisty women of courage, but hardly strong enough against the prevailing social forces to bring substantive change.  They simply led the move toward greater equality in the workplace -- something that would be several years away for ordinary black women.

My word forms the basis for my work, and I felt threatened by her denial of my truth.  Partly, it was because she is a professional, an academician in the field of history; an historian.   I think I'd expected more, and found disappointment in the naiveté her denial suggested. I am working from my memory of the times -- not dependent upon research -- but purely on what comes up for me during my presentations.  I've never claimed otherwise, and it has always been enough, at least until now. Her denial caused me to doubt my value as a carrier of this history, and knowing that the work of our park has come to rely heavily on my word, this was devastating.

I had always known that some black women had worked as laborers earlier, and that there were always exceptions, there always are prior to policy being established.  I'd been one of those forerunners all my life.  It is my belief that black women began to be trained as welders as policy late in the war.  Before that time they mostly swept the decks and picked up trash while other people worked.  This photo -- taken at the time -- would support that assumption.


To have claimed that because we built a home in the suburbs in 1953, therefore people of color integrated the Diablo Valley at that time would be folly.  Our moving in was just the start of a twenty year process that would carry much pain and anguish.

By invitation, I would return some years ago to that community to give the Martin Luther King Day keynote address.  Upon acceptance I looked up the demographics of the City of Walnut Creek in preparation for my talk, and noted that, a half-century later, the black population was at 1%, still.  That figure may now be suppressed for economic rather than racial reasons (I suspect), but is nonetheless not the norm.  Maybe that's a kind of progress, but I noted that figure in my speech.

I'd eventually grow to recognize the years we spent in that otherwise white and upscale community as a period of being culturally-deprived.  I'd moved back into the urban areas and my kids, now all out of high school, were dispersed to a variety of places because suburban living was less than I'd hoped for them, and the nation was sorting itself out in ways that seemed more promising in the Seventies, than ever before.

It was in 1972 that my marriage ended, and re-marriage to Bill Soskin occurred, starting a completely new life as a faculty wife on the University of California campus in Berkeley -- and eventually -- a merchant and political activist in Berkeley.

The price of trying to stay sane in an irrational world had taken its toll, and -- as you can see by the gaunt figure I became while struggling against insurmountable odds -- I was at high risk for suicide, but was rescued in time by Dr. Jean Neighbor, a perceptive and caring Jungian psychiatrist, and Betty the Artist who lives behind my eyes.  He teased her out and gave her substance that is with me still and guides my work.


I imagine that the black woman in the photo above is by now a grandmother who may have visited her husband in prison over the years, and may have by now seen at least two of her grandsons lose their lives to violence.

I'm  hoping that my talks may bring some  understanding to the continuing plight of people of color in this evolving nation, and if so, I will go on speaking to my own truth and not be dissuaded by anyone or anything that might derail my efforts.