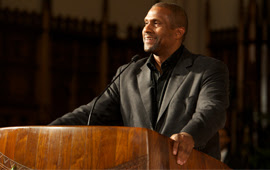 Flying off on Monday morning for a taping of the Tavis Smiley television show to be aired some time next week.

The invitation came a few days ago from producer Devin Robins, who worked on the Farai Chideya show -- an interview show of which I'm unambiguously proud.  It was one of those many telephone interviews where the host was in a New York studio and I'm sitting on the floor of my bedroom on the Left Coast in my pajamas as I recall, and barefoot, un-lipsticked uncombed hair, sipping a cup of herbal tea.  The interview was relaxed and went well.

We've never met and never really exchanged words except through Farai.  Nonetheless, that was about a year ago and she is now in Los Angeles and working with Tavis Smiley -- and here was her voice on my office phone voicemail inviting me to come to tape a show for airing next week on the PBS channels, nationally.

(I know.  It's crazy and wild, but true.)  Next thing you know I'll be turning at a Kardashian party hanging with Kim and Kendall, and bouncing North on my aging knee!

In only two days arrangements were completed through our park staff, with my son, David, to act as escort -- and another adventure has been scheduled to occur at the beginning of next week.

Time to bring out "Helen," the persona my psyche has created to handle those things I can't possibly do, and let us pray that she's ready.  I've been thinking of giving her a separate name tag and her own stylist.  She's being called upon more frequently of late, and will need to be in good shape for the Telluride Mountain Film Festival where we're participating in a symposium, and will both need everything we can dredge up for 4 days at 9000 ft. next to Heaven.   I'm told that the upper performance area is reachable by gondola, and I'm hoping that Helen isn't terrified of heights.  I am! But what have we got to lose at this stage in life?  What a way to go!

Then it's on to New Orleans and festivities at the National WWII Museum in early June.

Can anyone believe this?