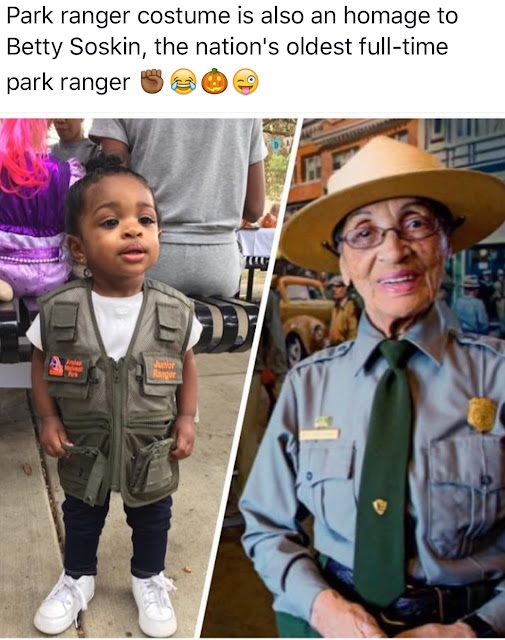 Almost from the day that the  first shipment containing my  ranger uniform arrived ... .

I've felt the pride that must surely be shared throughout the National Park Service -- the pride in the wearing of the "green and grey."  I was a part of that culture now, and from that first day I've felt at least 3 inches taller as I walk out into the community.  It never fades but continues to add spice to my work.

I remember being on an escalator at Macy's floating down in full view of all!  It was such an intoxicating sensation gliding noiselessly from on high onto the floor below and into a family gathered at the bottom with a lovely little young brown-skinned child looking up at me with such a look of wonder in her eyes ... and I was keenly aware that it was I who was the object of that look.

It was then that I realized the power in my image; that of being suddenly able to effortlessly and silently announce a career path into the  lives of every child of color I encountered.  To this day, that miracle repeats in elevators, on public transportation in all its forms, wherever I go and it continues to be heady and exhilarating each time it happens.

This image of "Ella" appeared yesterday through an email from 3 different people, Bonnie Allen, Judith Wilson-Pates, and Alonzo Davis.  It's a photo of Ella's halloween costume that was (according to the message) "an homage to Betty Reid Soskin, park ranger."

This 'lil' munchkin has been on my mind ever since.  There's something important here.  This little girl is probably being introduced to the concept of "respect," something she'll not understand for years, and it has little to do with me, personally, as much as with this flat hat, the brass i.d. bars and shiny badge, the meaning of respect for authority, and it will date back to this feeling that, hopefully, will be born in these early years.  This is what I saw in that little girl's face at the landing of the escalator in Macy's housewares department in those early years of the wearing of the "green and grey."

... but Ella will also know -- as we all must learn -- that one can only learn respect by being respected.  There is no other way to do so.  It may be an over-simplification, but I doubt it.  That simple truth might be useful were it given its proper place in community policing manuals.  This is the principle embedded in Black Lives Matter.


... and after so many years of reality television, this has been lost in the general population.  I truly believe that this abominable cultural development has eroded respect as well as any sense of empathy by its promoting of competition for its own sake, and selfish boorishness repeated ad nauseam throughout our systems of communication and social media --  so pervasively that we've ceased to even notice that we've been devolving now for decades, and that it is dangerously corrosive.

How else could we have ever arrived at a possible Trump presidency?