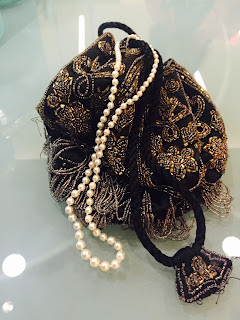 It's one of those lazy Sundays, and going out into the smoky air is not recommended for elders ...

...so I'm trapped with memories of the recent past; memories to escape into ...

This beautiful little evening bag bearing a Paris label was an anniversary gift from Uncle Raleigh Koker to his wife, Aunt Emily.  Emily (affectionately known as "Nanny" within the family) was great-grandmother, Leontine Breaux Allen's eldest daughter, and the childless daughter whose home had always been welcoming to each Allen son or daughter as they left St. James Parish for school in the City of New Orleans.

Aunt Emily gave the beautiful silk beaded bag to my mother's younger sister, Vivian, at graduation from Xavier. Vivian lived with the Kokers throughout her college years.  Much later, Aunt Vivian passed the little bag along to me as a gift.  I then gifted my eldest granddaughter with it on her eighteenth birthday.

At the national tree-lighting ceremony in Washington, D.C. two years ago, I was clutching it in my left hand while holding the script in my right as I introduced President Barack Obama to the country on national television.  In it was the precious coin bearing the presidential seal that President Obama had slipped into my hand when we were introduced moments before.

My granddaughters, Alyana and Tamaya, who accompanied me on that trip, had decided that it would be an important element to add to this event, and, just before we left our hotel room for the ceremony, Alyana silently slipped it into my hand.  Obviously, they'd gotten the message of the importance of legacy.

The pearls were a gift from my husband, Mel, given on the day of our wedding in 1942.  I'd given them to Alyana when she turned 18 with a letter explaining their history, that in a former life, they'd been loaned to (white) Susan Sanford, the daughter of a friend, and a college student member of SNCC, to wear under her T-shirts as she taught black children in a Freedom School in Canton, Mississippi, in Freedom Summer '94.  This was a simple way for me to have "presence" in that history.  Susan returned the necklace when she returned, and I could imagine that they'd kept her safe through that perilous Civil Rights struggle in which those 3 SNCC members were killed by the KKK.

The girls brought the little necklace along tucked into their luggage to Washington, and the pearls were inside the little beaded bag in which the presidential coin would be placed.

All of this fell into place seamlessly without prior planning or a warning ...

All that history, all those generations, all that love ... .
Posted by Betty Reid Soskin at 5:51 PM