They've been stashed in an old canvas travel bag in the back of closets for nearly a century ...

... more than 2 dozen of these fading photographs of various inventions and constructions of my grandfather, Louis Charbonnet.  As I've moved from one house to another over 9 decades, they found new stash sites in each, but rarely were they brought into the light to be viewed and appreciated. Instead, they'd been consigned to history.  So it had been with my father, Dorson, who had served as apprentice to his father, as did his 6 brothers. Dad had moved them from place-to-place over as many decades in his time before they came to me,  there being no one else standing by to receive them.  They're mine by default rather than intent.
.


A few weeks ago, I turned them over to a friend, John Nutt,  a fine film editor, for enhancement and transference to a more contemporary format to be shared with other members of the Charbonnet family.  Upon completion, he and Ann put them on a thumb drive, and in the process, I've held the originals in hand for remembering and wondering ... and you would not believe how many memories have been recaptured and reclaimed.

I can almost feel his presence ... 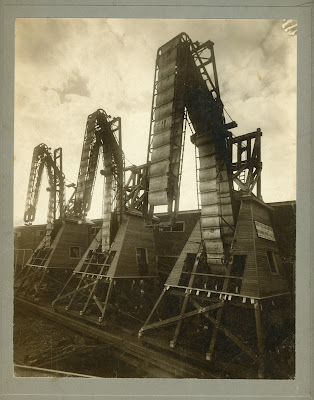 Over recent days I've been posting some of them on Facebook to share with family and friends, and realized for perhaps the first time, how important his contributions were to the African American narrative, and to the life and technology of this nation.  The fact that his great works were never attributed to his talent and skills, but had to be done under the licenses and permits of white contractors or not be done at all, must be shared.  In his time a black man could not apply for nor be assigned a patent for his creations. Because this is not the story of my grandfather, alone, but was/is the fate of many who lived through those dark times.

Find myself wondering if we haven't lived into a time when the national deficits are less attributable to the poor education of blacks than to the mis-education of whites? We've lived into a time when we've produced a generation, many of whom truly believe that it was they, alone, who created the nation, and all that it contains or has achieved, (except maybe for jazz and gumbo).  At a time when the talents and contributions of all others remain hidden because credit was withheld through racism and bigotry.

My grandfather was educated through correspondence courses from Tuskegee University in Alabama.  Among my most treasured possessions are the dozen or so textbooks that he studied from.  They sit on a small bookshelf in the hallway of my condo,  just below the portrait seen above ... collecting dust... .

He was a millwright and architect with many constructions and inventions in New Orleans and elsewhere.  A millwright takes a function and creates a machine with which to perform it.  Among his would be this banana conveyor that was created on the dock at Mobile, Alabama, to move the fruit from ships to the dock.  That would have been in the teens of the 20th Century. 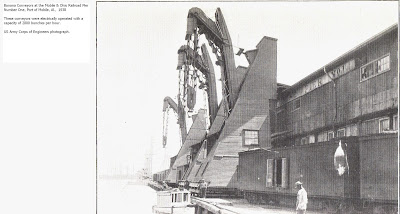 Fortunately, Elise Mattison's research turned up this photo of a  successor conveyor.  It is credited to the US Army Corps of Engineers.   The year of this photo is 1938,  and was taken on the same Mobile, Alabama, wharf.  The date of my grandfather's construction was 1906. That it is an updated version of my grandfather's work is clearly evident.


I once owned the blueprints to this invention, but over the years they were lost in the confusion of moving from one place to another.  Wish I had them still, though I'm not certain it would be possible to establish a claim to their origin in my grandfather's name at this point.  A white man named Edelson held the patent under which the conveyor was registered, and the contractor under which the work was done was another named Woodward.  These photographs are the only remaining record of his major contribution to the industry. 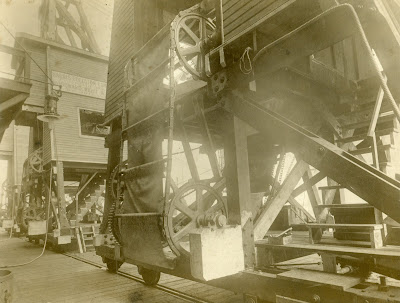 There are many photos of other constructions, which includes a rice mill; a huge baseball stadium for games played by the traveling Black leagues, Corpus Christi High School, St. John deBertrand's Convent for the Holy Family Sisters -- the first Order of black nuns in this country; Corpus Christi Catholic Church in the Treme; bridges and barges, and various buildings; the decorative iron works on the mansions throughout the Garden District and Upper St. Charles Avenue, etc., in old New Orleans.

I'm scheduled to travel to Washington, D.C. in spring, and am planning to deliver this collection to the new and wondrous National Museum of African American History and Culture, after giving family members enough time to download it into their own collections.  We now number in the hundreds, I'm sure, and our young members deserve to own it.

I feel strangely relieved after posting this, maybe because I feel connected to true greatness, for a man for whom recognition was not a part of his bargain with life.  He saw service to his nation as an obligatory requirement of citizenship; which, by now, is deeply embedded in our family's DNA.