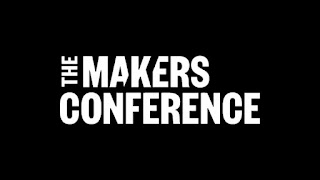 Just another day of surprises ... learning to rise to the unexpected with grace ...

Up until this morning -- The Makers Conference had merely been words of a listing on my calendar among other items with which I was mostly unfamiliar. Between the postings for "Of lost conversations," which is the title of my theater talks -- and are typed in green on each Tuesday, Thursday, and Saturday. Wednesdays and Fridays are usually when unusual assignments are scheduled -- those off site, or that will be before larger audiences than our little 48-seat theater can accommodate, as with the Coast Guard on their Base in Alameda last week.

I sometimes have been contacted directly by an organization, agent, program provider, etc., and the request is forwarded to my superintendent or supervisor, and the listing doesn't usually come "alive," until the "day of."  Fortunately, those two colleagues provide a screen for me so that I'm not overwhelmed by requests that are not appropriate, or that can be passed along to other rangers. 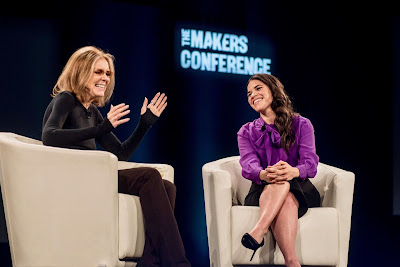 It is at times an interview by phone for some content provider, a SKYPE interview with some faraway conference room or class of young people, or, any number of public situations that would have been impossible to manage not so long ago.  For instance, last Friday evening -- by prearrangement -- I met a young African American woman who was representing an environmental organization.  We did it on SKYPE.  She was sitting at her laptop somewhere in Seattle while I'm sitting at my I-MAC fully and fittingly dressed in my little black cocktail dress while -- below the waist I'm in denims and bunny slippers!  She was delightful, curious, asked great questions, and there was an immediate connection that spanned the miles magically, and I could feel myself smiling when we cut the connection and returned to our separate universes.

This morning Sara, a media person who produces for the Makers Conference arrived to drive me to the destination where our interview would be filmed.  I've known this event simply as a listing on my calendar for months now. Sara, a beautiful young woman, abandoned her status as a mere email contact and materialized in our parking lot.  I am being honored at their 2018 annual conference at the Terranea Resort in Rancho Palos Verdes, California.  This is the beginning of that process.  She'd flown up to direct an interview for promotional purposes.  I'd been through media interviews before, but THIS was something far beyond whatever I'd experienced to date.

First of all, former honorees for this important annual were Gloria Steinem and Hillary Clinton.  (While you're trying to absorb that) it may not surprise you (though it did me) that I would be driven to a great site that apparently had been rented for the day for this shoot.  Waiting was a team of about a half dozen men (a photographer, a sound techie, cameramen, a couple I can't label). They were in a room where more equipment of all sorts was standing ready for this interview -- baffles, lights, more equipment than I'd ever seen in one place, I think, though I've been working with two filmmakers for several years now, so shouldn't have been surprised.

We started at ten o'clock and I was returned home at just after one o'clock.  I have no idea where the time went. It went by so swiftly that it was unreal.  The questions were good.  Sara had done a lot of research of my blog and oral histories in preparation for the interview, and it seemed to go smoothly. The team seemed satisfied with the work that was done.

I'd mentioned my music in the interview, and on the drive home, offered to share that young Betty of 40 years ago with  Sara from my cell phone.  There was time for about 3 songs over the 6-mile drive.  It felt right.  I'm only beginning to be comfortable with bringing my whole self into these interviews.  The artist, Betty, is finally coming home.

For the first time I went to the Makers Conference website to see just what it is that I'll be doing come February.  I had no idea how vital is this feminist organization, or how important it will be to women everywhere.  To the extent that my life may be providing an alternative for aging to women seeking guidance, maybe that's a good thing.  We've been trapped in the adoration of youth model for far too long.  Having outlived my peer group and aged into a place where I'm no longer guided by models for the end times, this crazy undisciplined and unplanned life I've lived may yet provide a kind of road map for those seeking a way forward in these chaotic times, even if it's only a prescription for what to avoid, and what not to do!

It felt fitting, like something of meaning that can still be given at a time when the guidelines seem blurred, and the way forward unclear for us all.  Those of us out here -- where there is so little remaining future -- may have the ability to hold the lamp high enough to help to light the way for those behind us in this dimension before moving on into the everlasting ... .
Posted by Betty Reid Soskin at 4:14 PM