I remember Aretha as a 16 year-old young woman who was visiting the Bay Area with her father, the celebrated Reverend C.L. Franklin.

My husband, Mel Reid, was a promoter of gospel artists at that time, and was bringing all of the greats to perform at the Oakland Auditorium along the shores of scenic Lake Merritt -- before the huge audiences of African Americans who'd so recently migrated from the southern states of Texas, Mississippi, Louisiana, Arkansas, Oklahoma, to produce the ships for Henry J. Kaiser,  and armaments of WWII.  They brought the richness of black culture with them, and our lives would be forever redirected.

Rev. Franklin was of one many who were presented before the roughly 6000 attendees who gathered for amazing and exuberant gospel concerts on those memorable Sunday afternoons.  Among those were Rev. James Cleveland, Shirley Caesar and the Caravans, the Five Blind Boys, Soul Stirrers (with Sam Cooke), Mighty Clouds of Joy,  the  Clark Sisters, Mahalia Jackson, Lou Rawls, Rance Allen, and later the legendary Hawkins Family and the other local legends of the black gospel world.  So many who would form the bedrock of the world of black gospel, taking all of us with them, and catapulting Mel into prominence in that world.  It would be Mel and his young uncle, Paul Reid who would bring black gospel to the West Coast.  It would be Mel who would bring that huge crossover hit, "Oh happy Day!" to the world with the Love Center Choir. 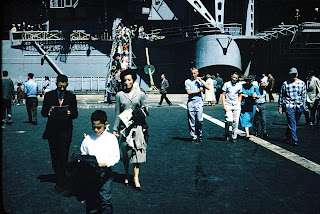 On that particular day when Aretha and her father were here (pictured above), I was off on some child-centric activity, while Mel took Aretha to lunch at  some signature Bay Area restaurant, probably one of the new ones on the Berkeley marina ... .

Our lives were already showing signs of separation, but we wouldn't be aware of it until much later.

As I recall, Aretha was 3 years older than our eldest son, Rick.  And it was her father, Rev. Cleveland, who was the big star.  Aretha was just on the cusp of the greatness she achieved over an illustrious lifetime career as a world renown entertainer, political activist, great Mom, leaving her mark on all who were ever fortunate enough to be in her audiences.  She provided the soundtrack for several decades of my life, but that was still in my future -- the dynamic and life-altering Sixties when the Civil Rights Revolutions moved into front and center -- and moved me, body and soul, into an era of soul-searing growth that still resonates whenever I hear that arresting powerful voice singing the "Songs in the Key of Life", that have been filling my head and heart all day as the nation mourns ... .


It is now many decades later.  I'm approaching my 97th birthday in a month, and today the great Queen of Soul passed into eternity.

Thinking of just how many of us touched lives in that innocent past, before either we or the world would have any idea of where destiny would take us ... .
Posted by Betty Reid Soskin at 7:39 PM