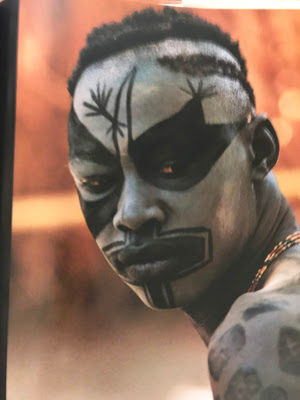 Wondering if I've taken on more than I can extricate myself from ... ?

Yet, it's too late to back out now.  The Grim Reaper could appear almost at any moment, and I might have failed to make my case:

(it may be helpful to read the last post, below, before reading this one.)

These masks have always fascinated me, ever since I ran across Riefenstahl's remarkably exciting coffee table book back in a time before the millennium.  I was fascinated when reading the description of her  visits to the Village of Kau every two years for many years, and that she'd studied the villagers at a time long before their rain forest settlement had been invaded by European forces (scientists, archeologists, anthropologists), and long before the influences brought with them began to drastically erode the culture. 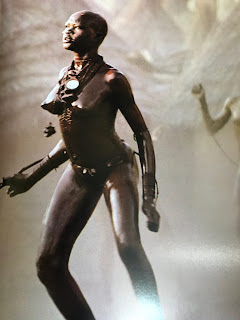 I remember tears of sadness when reading that within about 3 years after this book was published, she'd returned to Kau to find those lovely black bodies clothed in Levis, and most of the brilliant cultural effects muted by western "civilizational" overrides. 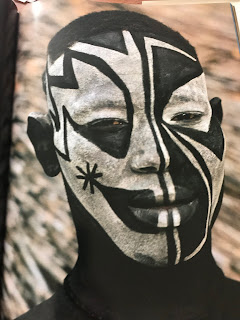 I was married to Bill Soskin at that time, my brilliant psychologist husband, when I first met the people of Kau through this amazing book, and doing so strongly influenced the way I began to view black culture.  I remember -- while analyzing some data gathered by Bill's research project with which I worked at the University -- that maybe we were a Right-Brained people being test-assessed by a Left-Brained system.  Could it be that the instruments that might measure what Black people were good at had simply never been created?  That we were being mistakenly measured by tests that would never provide any real information about who and what we were, and what gifts we brought with us into the world?  And that we would always have our intelligence and talents under-estimated by those left-brained analytical social scientists whose work would continue to over-estimate their gifts and talents simply by default?

Have you ever had the chance to watch little black girls jumping rope; Double Dutch?  The physical/mental skills needed by that childhood game  would challenge any lesser human beings who tried to blend the complex elements required for success.  Elements of rhythms, songs, intricate footwork, agility, the coordination needed is so daunting that one stands in awe.  What is demanded by this simple children's game puts shame to anyone whose psyche didn't include the "jazz" element, the gift born to most ordinary black children, and genetically passed along through the generations.

We see those same gifts illustrated on the basketball courts of the NBA, in Track and Field activities, on the stage in chorus lines, all serving as raw materials to the (European) coaches, choreographers, artists and athletes, who expropriate what they can use and toss the rest and black folks with them!

The analytical Left-Brainers break apart the elements, analyze, re-assemble the steps (strokes, notes, etc.) into an often reasonable facsimile of the original, and "own it."  And as often as not, set up the inevitable competition to establish dominance.  They re-define the "it," and critique it into something that those who created it have seldom reduced to mere words, but who can look into the eyes of another "sistah" or "brotha" with an instantaneous mumble of understanding and connection.  They may give it substance by assigning the over-used word, "Soul," or "Amen!" and are content to let it go at that.

I've always cringed at the sight and sound of superb black "back-up" singers and dancers fronted by less than spectacular "Stars" who gloried in the stolen spotlight.  A well known folk singer "fronting" that magnificent South African choir, Ladysmith Mambazo, comes to mind.


And what does all this have to do with me?

When I think back to the mystery of my late-blooming attention-getting fame in these final years, and wonder just why it happened, I've come to many explanations over time.  Could be because my life as recorded in these pages provide for the searching aging Boomer generation a reasonable alternative to the adulation of youth culture so common in this country.  Could be.  Could also be that the candor with which I deal with all that is a novelty.  Could be.

Lately a new rationale has risen to the surface, one that feels more likely;

The magic may be that -- for reasons unknown -- I've remained contemporary for my entire life.  Always a creature of the hour, living in the "Now!" This has been my true state of being since childhood. That's still where I'm positioned on the Spectrum of Life, and that may be best reflected in my work. 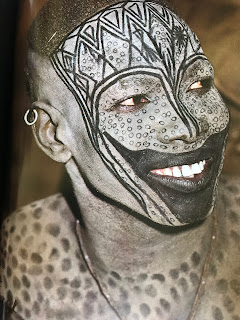 Instead of nostalgically looking back at the world of 1942-1945 -- the period celebrated by the Rosie the Riveter National Park site -- I'm interpreting that period against the canvas of "Now!", relating it to the environmental changes occurring in these critical years; seeing them in the context of generational challenges that share at least one thing -- the urgency that will wait for no one.

How my generation met the challenge of those hazardous years is a dramatic and gut-wrenching dilemma that today's youth are again being forced to confront.  It's another "Do or Die" era, and there are models for facing what lies ahead as the Earth continues into climactic change.  The threat is equal to and may surpass the terrifying times my generation has already lived through.  We have a duty to provide those models for the survival of the species, and I'm still around to participate in doing just that along with those of my time who are still alive.

Having lived into the future that I, along with millions of others, helped to create 50 years ago, I'm doing it in truth, and with the support and blessings of a federal agency.  I'm able to do it because of the "Jazz" element that may be our people's gifts to the world. Because we're willing and able to drop the guise of feigned innocence ("I've never owned any slaves; get over it!").  To challenge the concept of White Supremacy and the insatiable hunger to maintain Empire over the entire known world; as humanity assumes the responsibility of entering into this period of the Grand Improvisation that will be essential if we're to survive into the unknown future.

It does no good to look to the past for answers, at least not until we've heeded and absorbed the warnings from the scientific community.  Those answers lie in questions still to be developed by as yet unknowing professionals of all of the disciplines; they, who must rise to the crucial, troubling, and urgent needs now forecast by the futurists of the scientific world.


The entire world may now be entering the world of

because the worlds of the fundamentalist past have profoundly and utterly failed us.