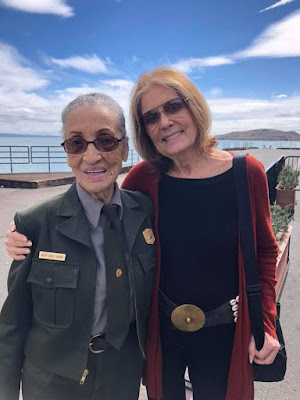 Yes, that's just who you think it is ... Gloria Steinem!

... and it's about all I can think about today, or at least would be if events of the day weren't threatening to blot out everything of importance in our country and world.

Woke to the panels on CNN and CSPAN preparing  us for the Senate vote for cloture; all in preparation for tomorrow's next steps in the process of seating Judge Brett Kavenaugh on the Supreme Court.

I'm not certain just why it was that I was still clinging to the notion that sanity would yet prevail, and that those old white men would finally see the error of their ways, and would show respect for Dr. Christine Blasey-Ford by honoring her truth.

It was not to be.

Senator Susan Collins of Maine, on whose shoulders rested the fate of that decision, finally gave her 45-minute statement that said all the right words, but little of the truth they were meant to convey.  She tried hard to cover all the bases by granting Dr. Ford a nod of acceptance that "... something had surely happened to her, but that it surely wasn't Brett Kavenaugh!"

Over the next 24 hours the final vote will be taken, but I know longer hold any thoughts for the hoped for outcome that every sensible and frustrated woman in the nation is screaming for.

But I need to tell you that I've known for several weeks that three friends I'd met while attending the Makers Conference in Hollywood last spring were flying out to attend my talk at the Visitor Center.  When I first learned of it from Amy Richards (of Soapbox Productions, NY) it sounded just too good to be true, so I held the news for a few days until it felt comfortable to share.

I finally trusted it enough to tell Tom Leatherman, our superintendent, but withheld it from the rest of staff. Then a plan formed, and it felt right.  I announced to our lead ranger, Elizabeth Tucker, that their visit on October 4th was confirmed, and that I needed our staff to work with me to make it work for us all.  We entered the three under the name, Amy Richards, in the reservations book in order to not disclose Gloria's name in print.

First, my talks have remained fresh and new for me over time by my being able to look into the faces, eyes, of an audience for whom the stories are being heard for the first time.  After so many months and years of telling those stories 3 and sometimes 5 times-a-week over a number of years, that has become the way that the excitement of sharing those long-forgotten truths without becoming numb to my own telling is maintained.  Without that aspect being honored, the work would become robotic, and I'd probably not be able to continue to do it.  There's an emotional component through which I find the energy to keep it real.  Without the authenticity the work would be impossible.


That meant that we needed to keep Gloria's visit under wraps, to not disclose her visit lest the theater become filled with docents, friends, relatives, and I'd be robbed of the "new eyes and faces" that were so vital to my work.

The secret was successfully kept, and the audience was made up of about 20 elders who arrived on a tour bus, plus others who had made their reservations with no knowledge of her anticipated presence.

After a lukewarm start -- since I'd had a sleepless night before due to a flu shot that created some discomfort -- but before the end of my talk I hit my stride when the energy kicked in and "Truth" weighed in with its usual force, and it all worked out.

Gloria, Amy, and Blaine, appeared to be moved by both the short films and my talk, and a leisurely conversation over lunch afterwards.  Amy was back on the Red Eye flying back to NY last night.  I can't imagine doing that ...  .

I will see them all again soon when, in early November, when I take off for NY events.