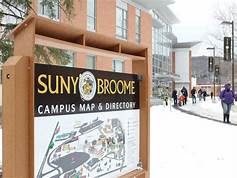 And I've still not written about my life-changing trip to SUNY Broome ... .

Some months ago I'd received an invitation to speak at SUNY Broome Community College in Upstate New York.  Not feeling comfortable accepting commitments that lie far in the future (I believe this would have been for Commencement) but really excited and flattered at the invitation, I passed the request along to my agent in NY for consideration.  She explained my reluctance despite interest, and explained that I would be on the East Coast for another engagement quite soon (this was the Glamour event) which opened the possibility of  adding a visit to Bloome to my itinerary
Plans were immediately made for a day or two extension to accommodate the trip to Bloome.

After a lunch at a local cafe we drove to the nearby campus to be greeted by a member  of the administrative staff who turned out to be a FaceBook friend who had been reading my posts and blog for a long time, which ended in her bringing about this invitation that placed us on this campus on this freezing day in Upstate New York.  You never know, right? 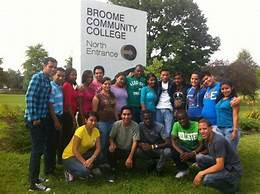 She met us in the parking lot and -- and in that strange way that social media has of brushing away the irrelevancies so that one is allowed to start in the middle of the 10th paragraph with total strangers, we came together.  We met as old friends and proceeded to a small auditorium filled with students and faculty -- waiting.  And, as usual, I had no idea of what I would say, nor was I regretting that I'd not prepared notes for this important occasion.  I'd just be Betty again, in public, and important things would happen.  I've learned to trust that.  It's what I do.  Especially in recent years as I consciously age into the unknown with this clarified sense of the preciousness of time and of these human interactions toward the common good.

There is something vitally important as one ages -- the sense of no long becoming -- but be-ing.  One needn't prepare, make notes, anticipate, for that.  In the moments left to me, I tend to skip the preliminaries and just BE!

Intuitive soul that I am, there were no more than a few minutes -- after the introductions -- to feel the deep despair in that room.  It was palpable, tangible, heavy ... .

I spoke for about an hour - including the Q&A -- and that feeling left the room with me, hung over me through the drive back to Manhattan, and remained overnight and throughout the flight back to the Bay Area.

It was strange in that I felt both saddened and elated, simultaneously, as I re-visited Broome in my imagination over the days ahead.  Wondered if what I'd felt in that room was the general angst of the young who are living in these days of  chaos, uncertainty, and gloom; of the dire predictions of global warming and climate change; of a sense of no one of consequence or maturity at the helm of an out of control government ... .

Elated because -- as I left that room -- I'd felt the warmth, the humanity in those hugs, in a firm sense that somehow, despite all, we'd touched souls that day, and that I'd made a difference.

And that's a story that needs a space of its own ... because the difference it made was not in that audience, but in me.
Posted by Betty Reid Soskin at 3:12 PM