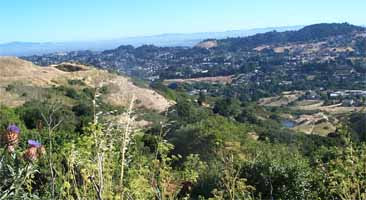 Planning Commission meeting went well (boring, but productive) in the way of most such gatherings ... .

The council chamber was filled with folks living in the immediate vicinity of the proposed 300+ upscale housing development. Only thing exceptional about this was that -- unlike many of the areas in our district -- there are more experts per acre than one might expect to find anywhere else on the planet. There were scientists, attorneys, geologists, hydrologists, planners, teachers, contractors, Greens and Sierra Club members; all folks who have chosen to live in a fairly rustic rural/urban community where open space is still open and wildlife still range free. Much of the land lies in an unincorporated area that borders the East Bay Regional Park District-owned high ridge that lies within city limits. This is a formidable group with the strength to take on the unsuspecting developers.

In preparation for this hearing on the EIR, last month I drove out and took a hike up a long and steep trail with about six others that led to the crest that sketches the horizon at the uppermost edge of the hills that separate sky from land high over the San Francisco Bay Area. Magnificent! The most incredible vista one can imagine. It was on a day when only the familiar finger of fog that creeps through the Golden Gate interrupted the endless stretch of blue sky... .

It was a steady upward climb (luckily, I'd been warned to wear proper hiking boots) that led past slide areas, wetlands (identifiable by what grew there), gigantic trees (one 150-year old cypress -- listed in the national tree register but unmarked for saving on the EIR). It would take twelve humans standing shoulder to shoulder to encircle its trunk. There were boggy places that will surely become ponds at the first autumn rain, and signs everywhere of hidden wildlife -- with hawks soaring high overhead. 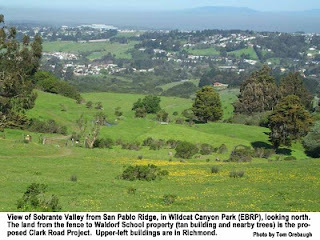 As we neared the higher elevations, my guides pointed out the city of Petaluma, a city that lies many miles away to the west, between the bay, the Coast Range hills, and the Pacific.  On a clear day the Sierra Nevada mountains are visible to the east.  At the top I learned that this trail (as we entered East Bay Park's Ridge Trail) is the beginning point of one that wends its way from here at the top of the world all the way to the city of Pleasanton -- more than 30 miles away and a three day leisurely walk that looks down on the entire San Pablo and San Francisco Bays; the five bridges that span them, and all of the connecting cities and towns.

Recalled that one of my dear friends, one of those who traveled to Georgia to protest at the gates of the infamous School for the Americas had recently taken that walk while escorting two of the nuns who'd been arrested there for committing daring acts of civil disobedience. Together they chose to take the three days prior to incarceration at Santa Rita (in Pleasanton) to walk from the city of Berkeley -- in meditation -- along that ridge all the way to prison. This is a privileged woman of principle who had traveled south to join the protest, was not arrested, but -- because of her strong commitment to the cause of freedom and need to act against the violence of the world -- did the trek with her dear friends.

I thought of Marilyn on my own walk that day and wondered if I had the courage to follow my conscience that far? Maybe ...

Last night I thought of my friend, as we sat listening to the deliberations of the Commission, and knew that -- were the vote taken (no quorum present so it was postponed until next week), I would have testified against the development. That ridge must be kept open for everyone and not privatized for only those who would claim the views as their own simply because their incomes would allow them to. No contest.

In the process of leveling and grading, the proposed construction will bury five creeks(!), eliminate mature trees, destroy habitat, hide slide areas from unsuspecting new landowners, and close off what no human should keep from public use.

The necessary state angle? And there must be one in order for me to interfere with what is clearly a city matter -- will be the relationship between the many groups I meet with below at sea level (Rheem Creek, Cerritos, Friends of the Five Creeks, the Urban Creeks Council, Friends of Baxter Creek, etc.,) where the work of daylighting is being carried out daily by diligent non profits and dedicated volunteers. It is as though no one below is aware that, up at the source where those wetlands feed into the watershed, ...far below as the creeks flow into the bay, they might simply die of thirst and lose the ability to serve as habitat for wildlife. This is larger than any city. This is a state matter because it crosses boundaries and effects the greater public good.

This also keeps any future Marilyns from being closed off from the magnificence of that heavenly ridge trail ... .She and I will talk about all that on the drive next Wednesday to attend a meeting of NOIT (Not In Our Town) in the Diablo valley at the eastern end of our  Assembly district. These are the times when I realize how frequently my decisions are based on the personal rather the public considerations. Maybe that's not such an unusual thing -- only rarely recognized and owned.

Such is the life of an aging but still effective public servant.
Posted by Betty Reid Soskin at 9:03 AM