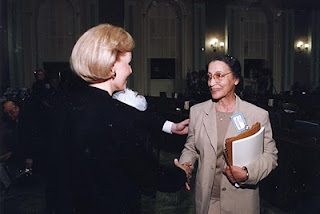 My Mac has been the recipient of my almost daily chronicles for a number of years, and, leading the very busy life that I do -- I asked my little magic box for little more than to gather up the thoughts and -- when appropriate, hold them for me a day or so. But I discovered over time that the process really was a way of allowing me to "empty" my mind in preparation for tomorrow's "deposits." Lacking the discipline to actually apply myself to keeping a journal, I rarely would keep those thoughts longer than it took to write them down, so had few ways to measure the steady progression toward my goals -- even the immediate ones. Wasteful and mindless, I think.

I am an elder. Working in as a field representative for a member of the 14th Assembly District of the California State legislature.  I fully enjoy being a "conduit for power" to those who -- often have little and expect less. Am far enough up the political ladder to touch the sources of power, but as a "lowly" rep, bear none of the responsibility of office. Great place to be, actually, and far more free to act on my political impulses than those who were actually elected to wear the mantle.

Since our assembly district encompasses parts of two counties and about 9 cities, there's a wide variety of opportunities to impact much of what takes place within it.

My work involves environmental and watershed issues; the developmentally and physically disabled communities; master planning for a new urban national park; the redevelopment of a 2-mile major urban corridor that involves a new civic center, a proposed arts & entertainment district, assisting in the reconfiguration of what was a three-story former hospital that is being converted into a human resources center, etc. It's an exciting and fulfilling way to spend a life that I'm figuring is now at the short end.  However, retirement remains distant despite advancing years.

After I've had a chance to read through entries by others and become accustomed to this format, I'm looking forward to exchanging experiences with you.

I'm off now to attend a meeting of the Planning Commission in support of a group of environmentalists who are seeking to halt a huge housing development that will take over the highest ridge in the hills above us; fill in four or five creeks and flatten known slide areas in a geologically fragile high wetlands. It's a city and not a state problem, so my role will not be giving testimony in the hope of challenging the environmental impact report (EIR), but simply to sit next to those who are giving testimony in order to imply state support. (Clever, right?)

Photo:  Governor Pete Wilson's wife, Gail, doing the presentation at the "Women of the Year" ceremony before the California State Legislature.  I was an honoree in 1996.
Posted by Betty Reid Soskin at 6:41 PM