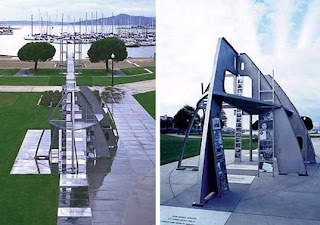 Received instructions from the NPS (National Park Service) that I'm to be in San Francisco at 5 a.m. on the morning of November 11th. "The interview will be from 5:00 to 8:00 a.m., since the networks work on east coast time." (There must be someone I can complain to about this!) There will be one other "Rosie" veteran of the home front workforce being interviewed as well, and the project manager of the newly-designated Rosie the Riveter Memorial in Marina Bay Park in Richmond. She's not been identified to me, but I'm sure that her name will arrive with the promised "further instructions."

Sounds a little like CSPAN, doesn't it? Can't imagine any of the network shows covering that kind of time allotment. Maybe the first hour is prep time (makeup?) and, perhaps there will be call-ins as well. Sounds intriguing, doesn't it?

Under ordinary circumstances, I'm in the middle of my dream re-runs at that hour of the morning. That means rising at somewhere around 3:00 or 3:30 and driving to pick up the others for the drive across the bridge -- and arriving at the studio (which one?) at five. Maybe I'll just not go to bed on the night before ... .

And so saying, I'm calling it a day with a promise to write something (hopefully) significant tomorrow. This was a dull day in comparison to most. Maybe that's because our panel was canceled and I've got all that Ashcroft Patriot Act garbage loaded without the capacity to discharge it! (Thought of a far more colorful way to say that, but decided to be nice. But you should see the grin on my face. It's positively demonic!)
Posted by Betty Reid Soskin at 9:08 PM