Saturdays have become writing days, but this one got away from me. 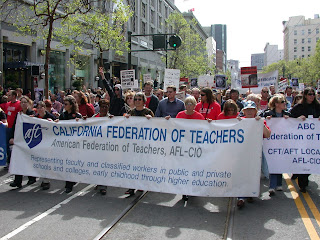 Spent the earlier part of the day not going to San Francisco. Watched the Peace Gathering in Washington, D.C., it seemed so sparsely attended. A surprise given the times and the current headlines. Found hope in the fact that it seemed youth driven, with most of the usual suspects, but predominantly made up of young people. Hoped they didn't feel abandoned by older activists (like me). Determined to get myself onto BART this afternoon and across the Bay to join what I hoped would be a great march and demonstration, but couldn't work up the enery to do so.

Having disappointed myself, it was impossible to use the time for anything else. Silly, of course. But it's now 4:38 p.m. and I'm just now getting to my computer. Did penance, instead, I suppose.

These monologues I get into are not very fulfilling, but when my PALM went off a little earlier, at 2:00 o'clock, and I looked to see just what it was that I was scheduled for and had completely forgotten -- and discovered that I was supposed to attend the memorial service for an old friend who died over a month ago ... the guilt piled on and there was nothing left to do but pull the plug on this day and begin again tomorrow.

The planets are obviously out of alignment.

Dorrie just called in tears -- "Mom, I was in the restroom at Sears -- put my cell phone down on the sink and two girls ran away with it!" Her cell phone is one of her tickets to independence. It's our high tech umbilical cord that reaches beyond all obstacles and connects us when necessary. I rarely call her, but leave it to her to initiate contact, always. It works beautifully. However, having it stolen is traumatic since I'm always on the other end of the line, waiting to be summoned (as she perceives it). Someone stole her mom! How on earth could they know what they'd done? Distraught, she apparently had been calling her own number and they've been laughingly hanging up on her, sending her into hysteria; so sad.

Kept her on another line so she could overhear my conversation (by now from her apartment) while arranging for the service to be suspended and another cell phone FedEx'd to her -- it will arrive on Wednesday. She was calmed, but has called six times in the past 25 minutes (while I've been writing this). Maybe she's simply testing.

I've worked so hard to make her independent, but it may be an illusion. I do hope not. Despite all, I'm sure that I'm the center of her universe, and that little can be done about that. But I suspect we've done better than most in overcoming the obstacles of her mental disabilities that must be met and dealt with. All-in-all she's doing well, but she will surely outlive me, and the thought of that causes my palms to sweat and to wake in the night with jaws aching from clenched teeth ... . When the simple incident of a stolen cell phone can be this disruptive, I'm reminded of the fragility of our situation.


But I found the poem and realized that, like the others, the work is dated. Rhyming is obsolete. Free verse is far more interesting, isn't it? But remember that these were written years ago, and I'm resisting the temptation to update them or edit in any way. They are what they are.

Most were written at a time when I desperately needed a way to travel outside myself and my circumstances while Dorian held onto my skirt. The only escape was to go inside. To rummage around and explore my own mind helped to keep me sane in a world that I often found anything but. I painted and sang and wrote hour after hour. The artist in me saved my sanity, but make no mistake, it was nip and tuck in those early years. And there was a two year period when only the sensitive care of a very fine Jungian psychiatrist enabled me to survive strong suicidal tendencies. But -- those were probably the most creative years of my entire life. I've pretty well reigned my artist in now, but she's the survivor -- and I suspect informs the politician who's pretty well carried the past several decades pretty successfully.

But Dorian's mother seems to be the toughest role of all, and keeping that woman in check and suppressed enough to allow Dorrie to grow away and into her own world is the most difficult of all to accomplish. Mother lived to be 101. I'll need at least that much time to accomplish the separation, I'm sure.