Loni's back and the world took over yesterday, as expected ... .

I'm finding myself reluctant to leave the past and return to this uncertain present (and future). There are few landmarks to follow -- most were obliterated in the recall election. "Governor-elect Schwarzennegger" (still not sure how many 'n's' and 'g's') still sounds impossible to wrap my brain around, and the implications of the change are still murky, impossible to read... .

We gathered around the conference table and tried to get re-oriented. There were as many questions hanging in the air when the meeting ended as there had been when we gathered. Although I must say, it was comforting to be back together after the vacations and illnesses and the many hours of campaign work that has filled all of our off-work hours for weeks. Maybe in a few days we'll discover that little has really changed in Sacramento. Maybe.

There's comfort in the fact that -- under our systems of governance -- the power is well distributed between many sources. Admittedly, those systems have become distorted and need readjusting rather desperately, but they're still in place -- at least in theory. The work of getting meaningful campaign reform legislation into place is of critical importance, and term limits must be reconsidered in light of the loss of institutional memory that so impedes the ability to legislate. 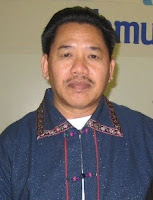 But trying to deal with such things while the body count from this leaderless revolution continues unabated on the streets, keeps us off-balance. Over the weekend we lost 4 more young people. On Saturday, the adolescent niece of the director of a local Laotian Service organization was killed by gunfire. Torm Nompraseart is someone I work with regularly. He is a refugee who arrived in this country after the war in Southeast Asian over 20 years ago. This morning I'll stop by the florist to pick up flowers to drop off at his office on my way to mine.

It seems ironic that nothing that I'll do today will be in any way related to the desperation I'm sure to see in Torm's face, or those of ordinary people in the Iron Triangle, or San Pablo, or in the borderless territories of the inner cities throughout the area -- families living in terror of their lives -- day after day.