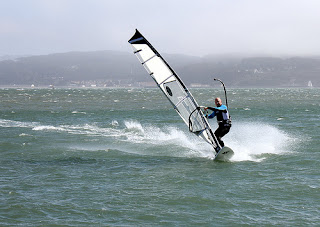 Stopped by the Marina on the drive home tonight.

Have gotten into the habit of taking one-hour vacations at frequent intervals of late. When I'm lucky, I catch windsurfers out on the bay -- looking like dragonflies skimming the water when they're off in the distance. When close up, the sight of young bronzed bodies pressing against the wind in precarious positions, but never stressing the risk factor that goes with most sports, but instead, always seeming to blend with the environment -- never to compete with it. Windsurfing seems to me to be more closely related to dance. Today there were several beautiful and colorful sails on the water, and it was lovely to add them to the sum of my day and an impossible week as an antidote to the madness. One of the joys of living here on the edge of the continent, at the edge of social and political change, and where the horizon is without end ... where only the Marin Headlands separates us from Japan and the China coast.

Second son, David, called a few moments ago with a reminder that tomorrow his little dancers are in performance at the East Bay Center for the Performing Arts. They're 5 and 7 and are in their third year of dance (if you can imagine). This fall they will begin ballet training after having completed "Dance Explorations" (okay, so that means the Bunny Hop, Ballin' the Jack, and other impressive movement "experiences"). They've had two years of African dance under a wonderful teacher and this year added drumming to their repertoire. They are also students at the Berkeley Arts Magnet School, and are doing marvelously. Tomorrow night we'll gather at the Center for a dinner show in a community of proud kids and parents.

The EBCPA is a 35 year-old institution that is located in the heart of the Iron Triangle in the old downtown part of Richmond. It serves (until recent budget cuts and the elimination of the California Arts Council) about 2100 children in the schools, and an additional number at the center, itself. There are generous scholarships so that no child is left out, and the racial and socio-economic mix is as broad as one would find anywhere on the planet, save maybe the UN, itself. Do explore their web site. Have served on the Board of Directors for many years now, and find it one of the balancing factors in my life, a way to deal with some of the negativity that I can't control.

Which reminds me, tomorrow I'll tell you something about David. And, there's a David Song, too, as I recall. This is Friday, and I'm needing to log off and re-fuel. It's been a devastating week, and I've got wounds to lick!

Will look up the link for the EBCPA, too, and I do invite you to visit.
Posted by Betty Reid Soskin at 6:42 PM