about my introduction to southern bigotry. It was when I was about fifteen, I believe. 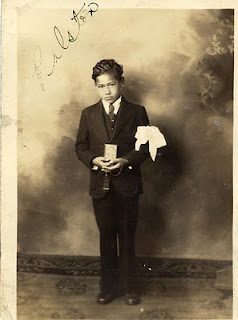 Though the older members of the family visited New Orleans as often as they could afford to, we children had never returned. My parents talked with great pride about "home" and the stories were filled with delightful incidents -- embellished by Dad, who had a great longing for his family and former life, I believe. His transition to California must have been far more difficult than for Mother since she was joining with her father, three brothers, and one sister had preceded her in the move. Dad had no one but his wife and three little girls, and his life's work as a fine craftsman was gone. That was surely difficult. Small wonder that he spoke of life at home so positively. Therein lies the disappointment of that first re-visit.

The only concession to the racial restrictions of the south had been the warning that -- "when the train reaches El Paso, Texas -- wherever you are on the train -- you have to pick up your things and move to the Jim Crow car. I was to later learn that this was the car up at the front of the train (where noise was greatest, I suppose), behind the engine and the baggage car, but I'm getting ahead of myself a bit ... .

I was traveling with my 8 year-old mischievous cousin, Ralston, who was going to spend the summer with his father who was still in New Orleans (trouble!). We did well over the first two days, were treated well by the porters and conductor. On the third day we reached El Paso. As advised, I gathered up my belongings and Ralston and headed for the Jim Crow car. As we made our way through the long train, we were advised several times to return to our seats. Even at the young age, I was sensitive enough to know not to give the rail car a name, but just to continue moving forward.

When we reached the coach, it was clear that -- from throughout the train -- other African Americans had gathered themselves up from among the "strangers" and were now "home." The porters and waiters who'd been merely polite and fatherly to us over the first two days were now playing host in "our" car. Out came the picnic baskets (from short-run travelers), and extra blankets and pillows, a guitar, cards and checkerboards, and small crate of live chickens! The party was on! The waiters and cooks delivered a continuing stream of goodies from the dining car and everybody became "aunts" and "uncles" to two young travelers. No one had thought to tell me what a wonderful experience "Jim Crow" could be. One of the many shades of gray. "Jim Crow" had its delightful side. One of those times that I would later come to understand. That despite all -- oppression can be a blessing in some unexpected ways. It can create community.

But, sometime during the middle of the night the train stopped at some small station -- either in eastern Texas or western Louisiana, to take on two guards and four (white) prisoners in irons who were being transported somewhere. With a few empty seats between, those frightening men were seated in the "colored" car with us. The final shame, I suppose. I must have fallen off into a troubled sleep at some point because I can't remember when they were taken off the train, but the fear is still on tap as I write.

I can remember thinking about that experience when I later heard the stories of -- during World War II -- how uniformed black servicemen were forced to ride in segregated Jim Crow cars while German prisoners rode "up front." Despite my western upbringing, I could identify fully with the feelings of shame -- for both myself and the "offending others".

No one had prepared me for that, or, for other painful lessons in southern hospitality I would encounter over that summer -- and for which I'd not been prepared.

I'm off to a meeting of the Federal Task Force on North Richmond, then to my office for a staff meeting and new assignments for next week. Governor-elect Terminator is being sworn in on the 17th, and Loni will be returning to Sacramento as the legislature is being required to meet for a week in extraordinary session. One wonders -- in these days of an extreme budget shortfall -- how this new governor can justify the additional that this will cost the state in per diem for the two houses to meet in this special session? But then, nobody asked me, right?

I'm off to see the wizard!
Posted by Betty Reid Soskin at 8:54 AM