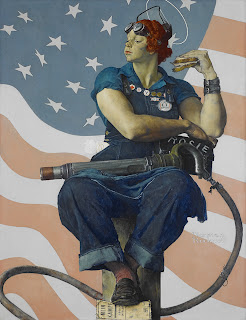 on a visit to the National Park Service's temporary office in Richmond's City Hall, I picked up a small black & white brochure advertising the new national park. I was thrilled with it since it was created giving full recognition to the role that African Americans played in the home front war effort, with several photographs that depicted Blacks on the job and/or in the community in related roles. There was even a sentence that I recalled having voiced in one of the workshops while participating in some of the master planning of the new park. I felt so good about having contributed meaningfully. The superintendent was at her desk when I stopped in, and it pleased me to be able to congratulate her on a job well done. There had been some moments over the past months when I felt that we'd not been quite in sync on racial matters, and that she really didn't see what all the fuss was about. She'd come from the East Coast to organize the creation of the Rosie the Riveter National Park and was doing her best to fulfill the mission.

Late yesterday afternoon I received a copy of a large and colorful public relations brochure with lots of photos of Rosie's at work, including one by Dorothea Lang and the famous one that had graced the cover of the Saturday Evening Post at the time. Every one of those pictures were of white women. This brochure was created by the high-powered public relations firm in Irvine, California, the same group that interviewed me some weeks ago at the Rosie Memorial.

It suddenly dawned on me just why that small black & white 8 pager with the truthful text had been created. The superintendent intended it strictly for local consumption in a community with a 40% black demographic. The fancy brightly dramatic large color piece was prepared for national distribution. We're back to "separate but equal" (well, maybe not quite).

Today, just before leaving my office for the day there was a call from the PR firm in Irvine. It was a young woman calling to make certain that I would be at the Ford Plant tomorrow morning at ten o'clock for the big media event.

Wish I knew what to do with these mixed emotions. On the one hand, to participate in the event as it has been planned -- as if I really was a legitimate "American" working woman of World War II, is to continue the lie. On the other, I can do what I ordinarily do -- seize the moment and speak truth in living color! I can just make sure that I'm seen both as a "set aside" woman of color who survived the virulent racism of the time, and, as a present day "woman of substance" in a position of power -- despite all. Tempting, wouldn't you say? The problem is that most of what happens tomorrow will not be live but taped for later viewing. I'll just wind up on the cutting room floor if I choose to say what most don't want to hear. It will be an interesting experiment that I don't think I can afford to miss. You'll undoubtedly never know how I handled it unless you read it here. Chances are that only the benign will be acceptable, and anything else will be edited out.

Have no idea where on the tube this national coverage will be shown. I'll be as anxious to see whether my interview will make the cut, the one made earlier, that is. Tomorrow will be its own adventure. Guess I've decided (while writing this last paragraph) that I'll go if only to satisfy my curiosity. But I don't count on seeing evidence of much real progress over the past 60 years.

But I mustn't forget that the little file clerk's risen to significant heights in the world. Am writing speeches for a member of the legislature and advising when appropriate, helping to create legislation, or,  at least having input into the decisions about what might be needed in the communities that fall within my area of responsibility. That's a story worth telling, I guess. But that's not the one we want to hear, because it exposes the underbelly of the beast of racism, and that's still not under our control.

Guess I'm still carefully picking my way through those countless shades of gray ... .