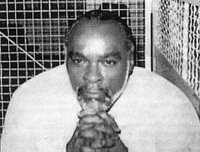 I firmly believe that the state of California, in the name of us all, last night executed an innocent man ... .

My friend and Stanley Tookie Williams's stalwart supporter, Barbara Cottman Becnel, has vowed to spend the rest of her life proving his innocence. She was one of the five who witnessed his death by lethal injection. The process took 22 minutes. That, she will accomplish with the help of others who shared her (our) conviction of both his innocence and his redemption.

Yesterday, on his day of execution, after a long day of meetings connected with work, I was just about to leave for home -- heading for the elevator -- when a colleague followed us out to announce that, on a break, he'd learned from a radio report that the governor had ruled against clemency -- in a six-page letter. I was shocked and distraught -- and angry. Walked with another co-worker to the parking lot in silence, climbed into my car, and headed into the commute traffic of congested I-880.

I had another meeting scheduled at 5:30 to deliver a talk to the Main Street Initiative gathering, and had intended to drive over to San Quentin to join with others in awaiting the midnight execution despite my earlier misgivings. But, after detaching from the pain of the awful news for the drive back to Richmond -- holding it all in suspension through my talk before a group of community members -- my car headed for home with me at the wheel, passively, and made no attempt to enter the Richmond Parkway or head for the prison. I felt like an automaton -- alive but just barely.

Tried to reach Barbara on her cell, but got a message that her service was completely filled. I had no idea what I'd have said to her even if I'd gotten through ... surely she was devastated. She'd devoted the last ten years to saving this man and pressing for a moratorium on the death penalty -- and now it was over. The only chance left was the last minute appeal to the Supreme Court. News of that denial came within an hour after I reached home.

At around nine the telephone rang sharply through my empty apartment (couldn't bear to listen to radio or watch television) and there was my friend and vigil partner from the past week, Rev. Paul Sawyer, calling from Cambridge. It was only then that the tears came.

I told him that I was feeling guilty for not being with the thousands of others gathered at the gates, or, at least mentally standing with Barbara in the death chamber, but that I couldn't bear it! I only wanted the night to be over and some sanity to return. He was comforting, "...of course you couldn't. You've done enough. Truly. But we've only begun, Betty. I'll be back on January 10th to begin the next protest against the death penalty."

After a period of quiescence, with only 11 executions since the restoration of capital punishment in this state, three are scheduled over the next 2-and-a-half months. The Leno Assembly bill will be heard in January. How could this be? Wouldn't simple compassion suggest that these next two state-sponsored deaths be held off until the bill was heard? Should not the governor have been guided by that as well?

I will join Paul at the gates for the next -- then the next -- and for however many state killings it takes before a moratorium is granted and sanity returns. He will never know how much his call meant to me in those hours.

Why was I feeling such fear combined with the sorrow -- as though my world had suddenly become even more hostile than I'd sensed even yesterday? Suddenly this execution became an extension of all of the death and destruction in the world, and the governor an extension of those associated -- rightly or wrongly -- with natural disasters, and mad-made cruelties from Abu Graib and Guantanomo; to Iraq and Darfur. My world had become a terrifying place.

Stanley Tookie Williams will be exonerated posthumously. I'm certain of it.

May he rest in peace. By all reports, he left this life bravely and with forgiveness for those who failed to hear his pleas ... .

Photo: Stanley Tookie Williams shown here in a photo that displays the post-transformation man of peace. The pictures used so widely in the media -- of the monstrous muscle-builder -- pictures were so fierce and fear-producing appeared to be deliberately distributed in order to support justification for his execution.
Posted by Betty Reid Soskin at 7:09 AM