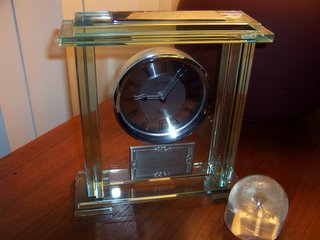 Trying terribly hard to not think about the governor's decision ...

and writing about those feelings only increases the tension. Such thoughts when combined with the emphasis on death these past days (the three Reid sisters, Richard Pryor, Eugene McCarthy, the anniversary of John Lennon's, etc.) bear heavily on my sense of vulnerability. But I'm sure that I'm not alone with such feelings, and that the weight of these days will transition into the holiday spirit at some point over the next few days -- unless the decision is the one dreaded... .

It's so hard to understand why -- when so little is being done to alter the downward spiral of so many lives of young black men in the innercities; when the conditions that created the monster whom even Stanley Tookie Williams denounces (his former self) continue to go unaddressed and unabated and cloning murderer-producing internalized self-hatred reflected from an admittedly racist society ... . not sure how to finish this sentence, or, even to unravel it in order to make more sense ... . These days are filled with incomplete sentences and limited understandings ... .

Maybe what I want to say is that this man who rose from the absolute bowels of rejection and dispair in the bleak aloneness of solitary confinement -- rehabilitating himself in the process-- if he can be allowed to continue his life and his work to help to save other lives -- maybe ... .

My mind is disorganized this morning. The words won't come. Won't organize themselves into coherence ...

Yesterday I attended the annual Sharing the Spirit event at the East Bay Center for the Performing Arts. It lifted my spirits for a few hours. Last night I dressed in my finest to join others at the annual Senior Ball held in the beautifully-decorated downtown Convention Center. Yet I was home and in my pajamas, in bed with a peanut butter and jelly sandwich and a (Kaiser Permanente) cup of hot cocoa by nine. Listened to my bedside radio for hours when sleep wouldn't come ...

It's mid-morning now, and I'm off to attend a chamber music concert with Tom this afternoon. That will eat up more hours. We'll have dinner someplace interesting, shrinking the waiting time by a few more.

If it's not too late, I may drive over to the prison tonight for a visit with those who continue to hold the vigil, but without Rev. Paul Sawyer and peace activist Barbara Barker -- it will be different. With the time drawing near, the tension will be almost unbearable. Been here before to protest the death penalty when I didn't feel any particular connection with the prisoner about to be executed. This is so different from those times. So intense ... .

But, however it goes, I will meet Paul and the others back at the prison gates on February 12th when the next man is scheduled to die. He is a diabetic confined to a wheelchair and is also a person of color, though not African American. The following execution is that of a Latino man, scheduled for some time in March. It feels somehow that it should be unimportant to mention race in connection with these pendings state deaths, but with such a large percentage of those on Death Row being from the poor and the non-white population, it's unavoidable -- a part of the sad story.

Tomorrow I will write again. The decision may have come in and this awful teeth-grinding worrisome pain of waiting will have ended.

Still holding that strong sense that this life will be spared and that the decision for a moratorium will be enacted come the January session of the legislature.

I do have this formidable sense of intuition that has served my life so well ...

It will be so.

Photo: Lovely crystal clock, a gift from my co-workers. It bears the inscription taken from a painting on my bedroom wall, "Against the ruin of the world there is only one defense, the creative act!" The painting is by Clarise Bois and often followed me to hang in my offices here and there. It's back home now and hangs behind my bed.
Posted by Betty Reid Soskin at 10:50 AM