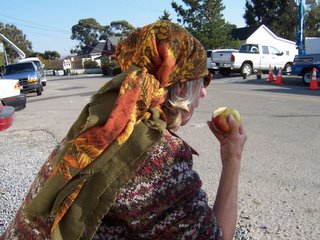 the completion of a park project that Naomi (my co-worker) and I have been working on for weeks. We conducted the first of two planned Leadership Tours of the identified structures that form the widely-spread Rosie the Riveter/Homefront National Historical Park. It was a total success that brought together a cross-section of community leaders and townspeople in a spirited 4-hour adventure that -- as it should have -- taught us more than we've previously known before about this city and its people history. Our goal was to begin to increase the awareness that this is a host city and that its people will soon be living in an urban national park. Richmond is in the process of becoming the place where the nation and the world will come to learn of and reflect upon World War II, a seminal event in world history.

We'd leased a 28-passenger tour bus, filled it with local folk who knew every building on our route but who may have never put them together into what is now identified and congressionally designated an urban national park. We started out with coffee and bagels at city hall, then an exhibit of the artifacts collection; proceeded to the marvelous woman-designed Rosie the Riveter Memorial, then headed out to view many structures: The supermarket of the day, the Greyhound bus terminal, Galileo Hall, the Park Florist, Winters Building, Carquinez Hotel, Old Post Office, Mechanics Bank Building, Old Main Library now housing the Richmond History Museum, the Whirley Crane and SS Red Oak Victory Ship at Shipyard 3, Atchison and Nystrom Villages, The Maritime Child Development Center, the Kaiser Permanente Field Hospital (now a Mosque), and finally the beautiful newly restored Albert Kahn Ford Assembly Plant that will eventually house the Rosie the Riveter Park's reception center. We left the bus for an inside inspection guided by a representative of the developer. The tour wound up at the Harbormaster Office building on the shoreline for lunch and a discussion about what we'd visited and to elicit their suggestion for further tours.

I saw "the Park" quite literally forming before us. These were the oldtimers, some nonprofit reps; the education specialist from the East Bay Center for the Performing Arts, the project manager of the Macdonald Avenue corridor from the Redevelopment Agency staff; a woman from Point Richmond Neighborhood Council, an officer from the Police Athletic League; the president of the Main Street Initiative board and his wife, a pioneer dress shop owner; a community Activist from the Iron Triangle among others; plus our entire Park staff including interns and volunteers.

What surfaced was an almost fierce pride in their city as these structures began to evolve in their minds into the park. Naomi stood next the bus driver narrating what we were seeing and inviting comments -- a process that quickly evaporated as our busload of veterans of those historic times and long time residents began to takeover the telling. It was terrific! It was as if they were suddenly realizing what congress had given to us; that the mission of the National Park Service -- which is to tell the stories of the nation's history through the preservation of structures -- held great meaning now. That they were a critical element in that telling, and that we (our staff) would be the instrument through which that will happen.

As my job description suggests -- Community Liaison -- next steps were suddenly as bright as day. Can you imagine a series of bus tours that each carried a member of the district school board, a member of city government, two public school teachers, and the rest of the bus split evenly between elders and teens? Rather than a few outside experts boning up on the history of World War II and then conducting traveling lectures for the locals; we would put together 80-year olds with young people -- take them on the same tour -- and simply allow history to be transmitted live! by those who lived it. We don't have much time to take advantage of their presence -- but can you imagine the richness of such an experience? We might tape or film these events against the day -- and quite soon -- when we will no longer have access to that living history. I cannot imagine that funding could not be found for such a venture after yesterday's resounding success.

However, that was only Thursday from 8:30 to noon. By 12:30 I was off to join the vigil at San Quentin through two o'clock, then back to check email at my cubicle, and catch some impressions from the rest of staff on our morning bus tour. It was all enthusiastic.

Left for home around 3:00 to shower and get ready to be a guest at the Kaiser Permanente 60th anniversary celebration where -- with other survivors -- I was to be again "honored at" as a Rosie the Riveter. This would mean another celebratory coffee cup this time with "Thrive!" painted thereupon, a Rosie dogtag, a little plastic 60th Anniversary bracelet, a photograph with dignitaries, and then home by 8:00 and a final check-in to see what had happened in Sacramento and how the wind might be blowing in the clemency matters.

Today I'm at home -- to listen for word from the governor -- to rest up from yesterday's marathon - to absorb as much as possible from reflecting on events that are moving me much too fast through time ... and to get ready to drive out into the valley to a sanctuary with Tom who drove down yesterday for the weekend -- then to return to San Quentin for a sunset vigil -- if there has been no word from Sacramento on Stan's fate. I'll drive Paul Sawyer to the Oakland Airport for the red eye late in the evening since -- after a week of living out of his car at the prison gates -- he fly across the country for a ministerial conference in Boston before returning to Pasadena. He and the others will return to the prison gates in February, in time for the next scheduled execution -- and a month later, another.

But ... I must tell you about a woman whom I've met at the prison who is an Evangelical Christian against the death penalty. She came here on November 30th from Camp Casey in Crawford, Texas. She lives in Colorado. She's not left the prison vigil -- but has been at the gates -- day and night since that date. She has college age children and is spirited and dedicated to her cause. She told me yesterday that prison people (I'm assuming spouses of employees) have wandered down to talk with her from time to time, offering her a chance to take showers and to bring fruit and water. She's been offered sleeping space on a boat harbored nearby as well. People do respond to dedication of others, even when we disagree. She told of stories of how many prison people stay away on nights when executions are scheduled, out of their own discomfort. I loved meeting her and will see her again tonight. Yesterday most protesters had gone to Sacramento for a demonstration on the steps of the capitol -- and only she and Paul Sawyer were still at hand holding the vigil.

My small world continues to be well-peopled, despite all.

Photo: My newfound friend, Barbara Barker -- from Colorado and Camp Casey where she stood with Cindy Sheehan until the camp disbanded for the move to Washington. She's one of the heroes of the movement to abolish the death penalty.

Posted by Betty Reid Soskin at 9:10 AM