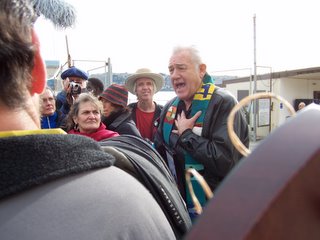 Wavy Gravy as "Sanity Clause" and other clowns I've loved ... .

Yesterday dawned like springtime -- except for the warning of an early morning chill that strongly suggested layering for the trip to the prison gates. Today's version starts with panty hose under blue jeans; great solution. Now to find ways to dress properly for a morning of ordinary daily job stuff and also to be ready for a quick noontime drive over the Richmond San Rafael bridge to meet the others. Today would be Wavy Gravy Day and from past history, it would surely hold some surprises.

As I parked and walked up the road toward the gate I could see a small group gathered around the prison post office entrance -- with several members of the media hovering nearby - waiting for some good footage they were sure they'd catch today.

Today there were fewer protestors, but those few who have formed the Alliance Against the Death Penalty to which Paul Sawyer has belonged since it was reinstated in the mid-nineties. But there he was -- Wavy Gravy now renamed "Sanity Clause" dressed in a tie-dyed rainbow-colored santa suit with an awful synthetic beard that he kept having to shift in order to clear his mouth for speaking. A bit later in the proceedings he renamed himself again, this time it was "Escape Clause." He was holding a bag filled with lifesavers, packages of Twinkies in which files had been placed very visibly, and Paul was out looking for a life preserver that Wavy would announce as a gift to be offered (on camera) to the governor. It was Wavy nonsense at its best.

He is a serious clown who runs a clown school, Camp Winnarainbow, in the Santa Cruz mountains, where the clown tradition is faithfully taught and practiced. He is in the Emmett Kelly mold -- but with a social conscience. He is one of the Pranksters from the Ken Kesey crowd. Paul, Wavy, and I lightly touched lives many years ago. In my copy of Kesey's "Sometimes a Great Notion" is a small bunch of dried wildflowers gathered on the beach at Asilomar in Pacific Grove by Ken and presented to me on a day when he was wandering around the dunes with a piece of adhesive tape over his mouth bearing the word, "hello." We were attending a UU Conference where he was the keynoter. He found me sitting on the dunes between workshops, playing my guitar, and silently motioned me to sing a song. I did. He listened quietly and when it ended -- he jumped up and -- like a small boy -- ran to the nearest cluster of wildflowers and gathered up a bunch then -- very formally -- presented them to me with a flourish. It was a delightful moment that I'll never forget. Those little dried blossoms are still with me. Ken died a few years ago. I thought of him and of his Merry Pranksters, and of Wavy and Paul and me, still here and still caring about humanity and willing to do whatever it takes, including dressing up in a clown suit, tucking his now white hair into a Santa's cap, and demonstrating at the gates of a prison to stop state murder in our names. There's just a bit of whimsy about it -- even under these oppressive circumstances. Wavy is sensitive to just how far to push the limits and the ways to maintain the necessary serious note to balance the nonsense.

It's the way of the clown, I suppose.

But that was yesterday. Today my workday didn't allow for a visit to the vigil. Tonight I came home to a message from Paul on my answering machine -- saying that Barbara Becnel, Lynne Whitfield (who played Barbara in Redemption,) and Snoop Dog had visited the prison. He told me that 25 demonstrators had engaged in acts of civil disobedience, had been arrested, and that they were mostly women. He asked that I call two members of the clergy that he hoped would join the vigil tomorrow, but he didn't have their phone numbers ... would I call? He sounded a little forlorn. The weather has been wet and cold with darkness falling early. They're sleeping in their cars and have been since Sunday. I felt guilty. Tomorrow I'll try to bring hot coffee, but most of all -- another witness -- myself.

Tomorrow I have an impossible schedule but there's a hole in the middle of the day that I will use to again visit the vigil and lend moral support. He flies out tomorrow night on the red eye to return to southern California. Others will carry on at the gates until either there is executive clemency, or, the unthinkable takes place on December 13th.

I lack the heart to wait it out at the prison. I cannot. But I will return on Saturday and Sunday. Not sure I'll try to make the march from the Palace of the Legion of Honor to the prison. Let's hope that the governor makes his decision before Sunday at eleven so that we can transform that march into a victory party!

... I cannot spend that last night at the prison gates. I just don't have the heart for that. This would be the first time that I will see the life of one I've come to know -- destroyed by lethal injection -- in my name and that of every Californian.